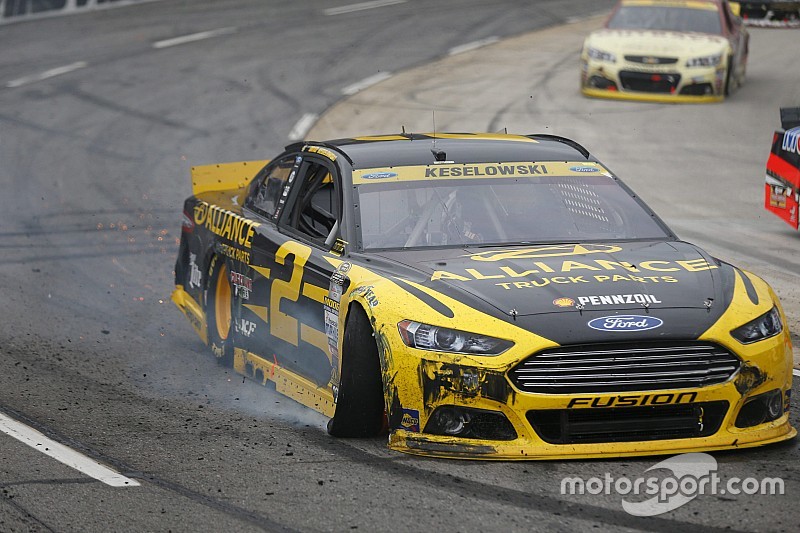 Now that the dust has settled at Martinsville Speedway, how did your favorite Chase for the Sprint Cup driver fare in the first race of the Eliminator Round on Sunday?

Jeff Gordon (4047) — Gordon took advantage of Team Penske’s problems to earn his ninth Martinsville Speedway win — and his 93rd career Cup victory overall. Although Gordon had been winless prior to Sunday, he called the win “one of the finest moments of my career.”

Not only does Gordon have a point advantage over the Chase field, his team can relax over the next two races and concentrate its resources on Homestead-Miami Speedway. Gordon has wins at the next three race tracks and finished ninth and seventh at Phoenix and Texas, respectively, in the spring. Gordon won the pole at Homestead last year and won at the track in 2012.

Kyle Busch (4039) — Busch battled back from 28th after a wreck on Lap 171to finish fifth on Sunday. The No. 18 was driving through Turn 1 when he hit water on the apron and went spinning in Turn 2 collecting his teammate Carl Edwards, Austin Dillon, Paul Menard and AJ Allmendinger in the process.

Although Busch has wins at Texas and Phoenix, he did not race at either track in the spring after being sidelined with a broken leg. Should Busch transfer to the season finale at Homestead, he will have to run better at the track than he has in the past. His average finish at HMS is 23.1 — Busch’s worst result of any track on the circuit.

The single-car outfit is holding his own

Martin Truex Jr. (4039) — Truex led more laps at Martinsville on Sunday than in any of his previous 19 starts at the half-mile track. The No. 78 Furniture Row Chevy dropped to 22nd on Lap 161 after a slow pit stop, but returned to the top 10 by Lap 191. Despite a run in with Tony Stewart on the track — and punting Trevor Bayne on lap 351, Truex matched his sixth-place finish in the spring for his sixth top 10 result at the track.

Truex did not compete in last year’s Chase with the new format but will earn a career-high finish in the point standings this season regardless how he fares in the next three races. Although Truex has never won at the remaining races in the Chase, he finished seventh and ninth at Phoenix and Texas earlier this year. He has an average finish of 10th at Homestead where he’s earned three top fives and seven top-10 finishes in 10 starts.

Reigning champ on the bubble

Kevin Harvick (4037)— Harvick soldiered home at Martinsville with an eighth-place result. While the No. 4 Stewart-Haas Chevy ran towards the front of the pack throughout the race, he could never outpace the Team Penske Fords. Harvick and Logano are the only two drivers to go the distance in last year’s Chase.

Harvick has never won a Cup race at Texas, but stepped up with a win at Phoenix last year to punch his ticket to Homestead where he won the title. And Harvick won at PIR again this spring — his seventh career Cup win at the track.

Carl Edwards (4030) — Edwards started 14th, but seemed lost throughout most of the Goody’s 500. He ran mid-pack for most of the day. On Lap 171, he caught a piece of the Kyle Busch’s spin and fell off the lead lap 200 circuits later.  Edwards earned his lap back following the multi-car wreck involving Chasers Kurt Busch, Brad Keselowski and Matt Kenseth.

He restarted 20th on Lap 443 and salvaged a 14th-place finish. Edwards has multiple wins at the final three tracks. But the No. 19 Joe Gibbs Racing team will have to put forth a stronger effort to compete against Gordon, Harvick and Logano.

Brad Keselowski (4013) — The driver of the Blue Deuce looked like the Keselowski of old on Sunday. Only his Penske teammate Joey Logano (207) led more laps than Keselowski’s 143 circuits at the point. But after the No. 2 Ford was tagged by Kurt Busch on the Lap 435 restart, Keselowski was fortunate to be scored as “running” as he limped to a 32nd-place finish. It was his worst finish since Bristol in April.

At the upcoming races in the Eliminator round, Keselowski finished fifth at Texas and sixth at Phoenix earlier this year. His only win in 2015 came at Fontana in March. After averaging a 7.3-place finish in the Contender Round, Keselowski will need a Hail Mary in the next two races to advance to the championship round at Hometsead.

Kurt Busch (4011) — Busch was happy flying under the radar in the first six races of the Chase — and that earned him a place in the Eliminator Round. Despite qualifying 15th, after seven laps ran under caution, Busch quickly moved up into the top 10. By Lap 60, Busch was in the lead.

He held the point for 22 laps and remained competitive until attempting to break up the Penske party at the front. Following contact with Keselolski on the Lap 435 restart, Busch dropped from third to 33rd and finished 34th. Although Busch has wins at the final three tracks, he finished14th and fifth, respectively, at Texas and Phoenix earlier this year.

Logano robbed of a win

Joey Logano (4009) — Logano entered Martinsville poised to win four consecutive races. His 207-lap race lead was interrupted when Matt Kenseth exacted revenge on the No. 22 Ford for pass sins on Lap 454. Logano went from the point — onto a hook. Although Logano returned to the track on Lap 497 and was scored 37th. No team enjoyed the No. 22 Penske team’s success in October.

But after sweeping the Contender Round, Logano finds himself in a must-win situation in the next two races. Last year the Shell/Pennzoil Ford won the spring race at Texas — where he’s averaged a fifth-place finish in his last five starts. At Phoenix, Logano has posted four consecutive top-10 finishes — but Harvick will be hard to beat in the desert. If Logano finds a way to transfer to the Champion’s Round, it will be one hell of a rematch between him and Harvick — but only if Kenseth gives him a pass

"Inexcusable" move should 'embarrass Kenseth, his team, sponsors and Toyota'