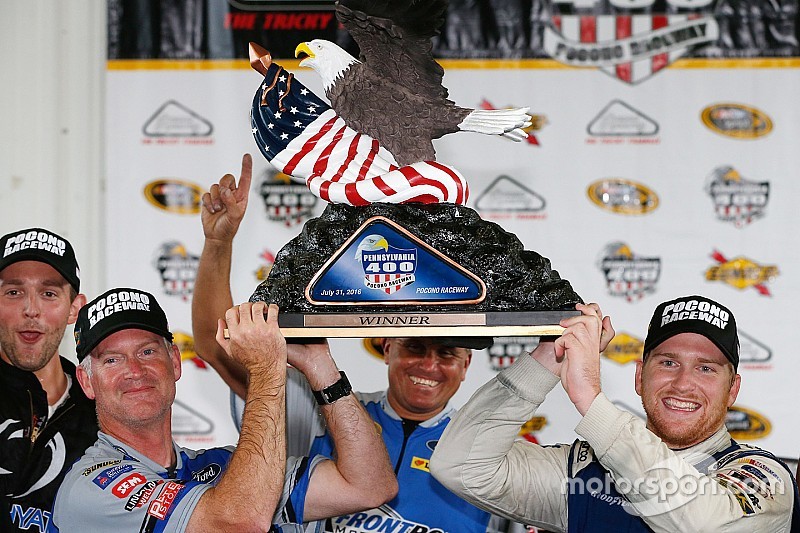 Weather forced a one-day delay for the Pennsylvania 400 but it also played into the favor of Chris Buescher, who scored his first Sprint Cup win on Monday.

After the teams fought through rain on Sunday, fog rolled into Pocono Raceway on Lap 133 forcing NASCAR to throw the seventh caution — and finally red-flagged the race at the 02:42 mark, ending 22 laps short of the finish.

"I'm just really proud of this team," said Buescher after the race was called. "They hung in there and got the damaged fixed and making sure we were in a good place to use strategy and make it work out.

"A lot of guys who were on a similar strategy as us pit just before we did. They made the call from the box to pull it off. Now we need to make sure we get in the Top 30 of points.

"It was stressful," he said of the wait. "I tried not to get my hopes up because I know how these things can play out. Mother Nature can be really nice sometimes and really mean. If that sun would have come out, it would have changed our whole day."

Buescher becomes the first Rookie of the Year contender to win a Cup race since Joey Logano at New Hampshire Motor Speedway in 2009, which was also a rain-shortened race.

"I'm trying to remember every rain dance I ever learned," Buescher said as he waited patiently in his car.

This does not automatically put the rookie driver into the Chase though. He still has to be inside the Top 30 in points, which he is six points shy of doing.

For Front Row Motorsports, it was the team’s first win since David Ragan earned the team’s first victory at Talladega Superspeedway on May 5, 2013 — 118 races ago. For Buescher, 23, it was his first Cup win in 27-career Cup starts. The Prosper, Texas native won the Xfinity Series title last year in his second full season on the tour. In 2012, he won four races on the way to the ARCA title.

Keselowski, who won his first Cup race in his fifth career start, was also happy for the rookie’s win. He understands what it means for an underfunded organization to win. Keselowski pulled off the feat with Phoenix Racing in 2009 at Talladega Superspeedway.

“I think it’s a great moment, not just for him but for his team,” Keselowski told Motorsport.com. “He’s done a lot. I think he’s a pretty good driver that is inline to get an even better opportunity in his career.

“I’m proud of him. He’s done a great job. He’s doing exactly what he’s supposed to do — and that’s make the most out of every opportunity and graduate to the next one.”

Larson, who led the most laps (37), finished sixth followed by Denny Hamlin, Carl Edwards, Kyle Busch and Kurt Busch — who came from last following unapproved body adjustments. Busch actually broke the record for leading every lap in the first 21 races of a season, previously set by Dale Earnhardt Jr. in 2012.

Bad day for the pole-sitter

Polesitter Martin Truex Jr.’s time at the point was short-lived. Although he led the first 16 laps, following pit stops during the competition caution (Lap 15), two circuits later the No. 78 Furniture Row Racing Toyota hit wall in the tunnel after a valve stem was knocked off of his right front tire.

“Just blew a right front (tire),” Truex said. “A lug nut bounced off the ground, fell in behind the wheel behind a pit stop. It’s just bad luck honestly.

"I knew something wasn’t right in (turn) one and two and I got real tight off of (turn) two on that restart and went down the back and was like, ‘Ah, it feels okay.’ And, as I got closer to the tunnel turn I felt it start to go down and by the time I let off and tried to slow down it was just going straight for the fence.”

Truex’s endured a second round of misfortunes after he slapped the wall following contact with Jeb Burton. The driver’s problems were far from over. On Lap 98, Truex hit the wall again and limped back just short of the entrance of pit road, ending his day.

Joey Logano led 38 laps prior to a wreck on Lap 105. Coming to Lap 82, Logano laid back and offered Larson and Dillon plenty of room to race. When the young guns collided, Logano went low through Turn 3 to take the lead.

But he was mired in traffic after pitting on Lap 100. Entering the Tunnel Turn, Logano had Denny Hamlin to the inside and Ryan Newman to his right. Chase Elliott came up behind Hamlin and as Hamlin and Newman moved on, Elliott slid up into Logano and the pair went for a  spin in Turn 2.

Larson led the field to green, but Kyle Busch got a jump on the No. 42 to take the lead on the restart. Larson took command of the race, but Dillon was catching him as he pitted on lap 125.

Buescher, who started 22nd and was saddled with a pass-thru penalty after he was busted for speeding on pit road on Lap 95. After he pitted on Lap 107, Buescher received the beneficiary on the Lap 110 restart. He led 12 laps before earning his first win.

"To get Front Row Motorsports back in Victory Lane - this is a different way to do it, but we'[re having a lot of fun here," said NASCAR's newest winner.

"It was an agonizing wait but I'm really proud of my guys. It's been awesome this year. The alliance with Roush Fenway has helped, just getting everything headed in the right direction. We're on the right path right now.

"I think we're pretty maxed out right now but this will definitely stir things up with the team. We got to get there in points. We're in the hunt. We can definitely get into this Chase now.

"We'll do it the same way we've been doing it - we have a lot momentum lately. We just need to keep clicking off these Top 15s. We need to get to a point where we're more competitive at the end so we can stay in the Chase."