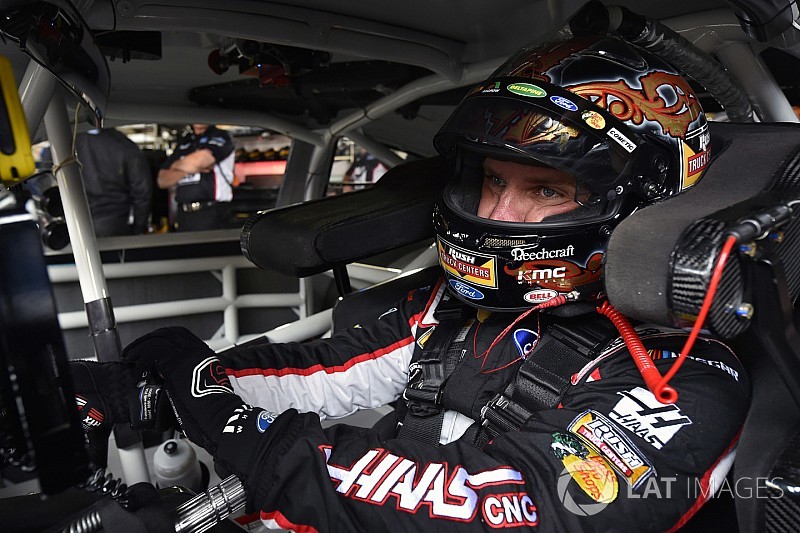 Clint Bowyer was running up front late at Dover but it wasn’t necessarily the best position for him.

Bowyer was leading Sunday’s AAA 400 at Dover (Del.) International Speedway when rain halted the race on Lap 319. Had it not been restarted, Bowyer would have collected his second Monster Energy NASCAR Cup Series win of the season.

But the rain soon dissipated and after a 40-minunte delay, the track was dried and the race returned to caution.

All of the lead-lap cars hit pit road for tires and Bowyer was the first car off pit road with his Stewart-Haas Racing teammate Kevin Harvick – who won the first two stages of the race – lined up alongside him.

Bowyer remained in the lead on the restart with 75 of 400 laps remaining.

“Clearly, Kevin was up front and was the car to beat most of the day. (That last pit stop) was our first shot at tires and taking off in clean air. It makes a big difference,” Bowyer said after the race.

“When your back in dirty air mired in traffic like we were most of the day, it’s tough. I knew, man. The car took off and it was turning really, really good and I knew it really needs to be tight and work into that.

Still, it took 13 laps before Harvick got in position to make a pass for the lead. Once it was over, Harvick checked out – winning by more than seven seconds.

“Sure enough, I just got way, way, way too loose,” Bowyer said of his No. 14 Ford as the race drew to a close. “It’s fun to be running like this again and competitive and upfront and in the limelight.”

Although Bowyer qualified fairly well (12th), he got mired back in traffic early in the race when ran through his pit box during a stop and the front air hose got stuck under his car. He lost eight positions on pit road.

Bowyer believes if he had the opportunity to remain up front in the race, it would have helped prepare his team better for the final 75-lap run.

“If I had the day to do over again, I’d have liked to have not had that pit stop and had some runs in clean air and be able to adjust your car that way,” he said. “All day long we were adjusting to according to where we were and that was mired in traffic.”

Bowyer led another 40 laps in Sunday’s race bringing his season total to 300. He’s led more laps already this season than he did in the last four years combined. He remains fourth in the series standings, 46 points behind Harvick.

“This is a huge confidence and a momentum builder for our No. 14 team, for our organization,” he said. “Just proud of everybody’s effort, proud of the opportunity, and you know, excited to go to my home track next weekend (Kansas), and the rest of the year is going to be a lot of fun.”