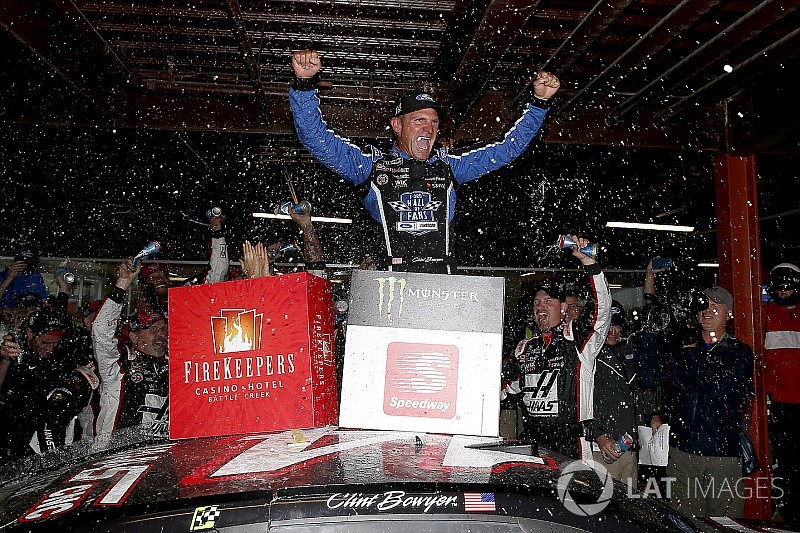 The rain held off just long enough for Clint Bowyer.

Sunday’s FireKeepers Casino 400 was official after the completion of Stage 2 and the race made it just 13 laps in the final stage before rain enveloped the area around Michigan International Speedway.

NASCAR called the race and Bowyer ended up with his second Monster Energy NASCAR Cup Series win of the season and 10th of his career.

"We won! We won! When he said, 'two tires,' I was like, 'I dunno,' especially when you look in your mirror and everyone else is taking four," Bowyer said talking about his crew chief's call to take two tires on his pit stop between Stages 2 and 3. "When you come out that far ahead of everybody, you know it's a great gamble.

"One-two-three for Stewart-Haas. What a gutsy call. We won again! How 'about it?"

Asked about the final restart where he held off Harvick, who had taken four tires, Bowyer said, "On the same tires with Kevin Harvick on a restart, you know what you're up against. He was so much faster than me in (Turns) 1 and 2. I got down in (Turns) 3 and 4 and I had to chop him off and take his line away from him.

"I was like, 'It better rain quick because one more lap and he's going to get me.' Very, very proud of everybody's effort today - unbelievable.!"

During the break between Stages 2 and 3, Bowyer was the first off pit road thanks to a two-tire pit stop and took the lead when the final stage went green on Lap 126.

He was followed by Harvick, Kurt Busch, Kyle Busch and Blaney.

Jimmie Johnson had to start the final stage from the rear of the field as his No. 48 received a penalty for an uncontrolled tire during his pit stop.

Harvick challenged for the lead on the restart but Bowyer was able to hold him off.

With 72 to go, Ricky Stenhouse Jr. spun off Turn 2 and hit the wall to bring out a caution. While under caution, rain – which had threatened much of the day – picked up and NASCAR brought the cars down pit road.