DARLINGTON, SC - Ricky Craven piloting the #32 PPI Pontiac out dueled Kurt Busch in the final laps of the race to score the victory at Darlington Raceway. It is Craven's second Winston Cup career win; his first was 47-races ago in Martinsville. Craven and Busch traded sheet metal down battling down to the wire in the closest victory since NASCAR switched to the scoring transponders in 1993. 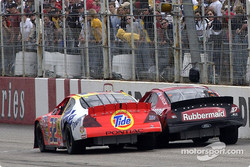 "It probably started with 20 to go after Elliott [Sadler] got a piece of the wall and we got past the No. 38," commented Craven on the final laps. "Of course, Jeff [Gordon] got a little piece of the wall and then Kurt [Busch] was out there and it was like 'Well, here it is. We've got our chance.'

"We were so good on the long run all day. We had a package that was mediocre at best the first half of the run, but good the second half. We needed a 60-lap run. Had we gotten a 60-lap run we wouldn't have even had a chance, but we had that long run and it got slicker and slicker. The sun came out and it just played right into our hands. We just started gaining speed.

"But the last five laps were just - I'm really not sure," Craven continued. "I'm going to have to watch it because..looking back it's the most fun I've ever had in my life."

Busch, who blew an engine in practice and had to start at the rear of the field in the No. 97 Roush Ford, took the lead at lap 269 after blasting past Jeff Gordon and Elliott Sadler. Gordon, who was leading, and Sadler running second were caught up in a fight for the lead, when Busch took advantage of the situation with a gutsy outside pass for the top spot.

Busch pulled out to a three second lead over the field and looked to be position for the win when the No. 97's power steering died with ten laps left on the scoreboard. Craven seemingly came out of nowhere and the two began their side-to-side bumping on the final two laps. Craven nipped Busch at the finish line in a photo finish by the slim margin of two-thousandths of a second.

"It was awesome and that's what it's all about, just racing as hard as you can" said Busch. "I've got to give congratulations to my team and all the effort that we've put forth. We're just missing one little input. If we can get all the inputs in the right place, we can win some races. This feels great."

Gordon and pole-sitter Elliott Sadler would each suffer similar fates. Both drivers hit the wall after Busch passed them, knocking the toe out of their cars. Sadler slid backwards through the top ten, but managed to pull out a 7th place result. Unfortunately for four-time Winston Cup champion Gordon, his contact with the wall was terminal; he finished 33rd.

"I just got in there," Gordon commented. "It seemed like the right rear just caught it a little bit and sucked the right front in, knocked the toe out and it was over."

Finishing third was Dave Blaney driver of the No. 77 Jasper Ford scoring his best ever career finish.

"It's huge," said Blaney. "I felt like I could race with these guys, it's just tough to get everything put together. I feel like we've got a team that's running well. Everything is flowing pretty good.

"We're not changing much with these cars. They're fast off the truck and Bootie [Barker, Blaney's crew chief] has the whole team energized and doing a great job."

He was followed by Mark Martin in fourth and Michael Waltrip in fifth.

Sixth place finisher, Dale Earnhardt, Jr. led a race high 91 laps before losing the lead on pit road. Earnhardt had to return to his pit stall to tighten lug nuts on the No. 8 DEI Chevy after lap 189 green flag stops. The misstep took him out of contention for the win.

"This [Darlington] has really been an Achilles heel for us in the past," said Earnhardt, Jr. "I feel real confident about this run today. I'm pretty happy.

"You just fight as hard as you can and get the best finish you can," said Kenseth. "If you've got an eight-place car, you've got to finish eighth. This was the best we could do."

Cautions started early, the first coming out at lap six as the No. 01 Pontiac of Jerry Nadeau hit the wall in turn one. Matt Kenseth, trying to take evasive action to avoid Nadeau, lost control and spun the No. 17 Roush Ford. Both drivers were able to drive away from the scene, but Nadeau's problems would not end there.

After recovering from the lap six spin, Nadeau managed to climb back into the top ten, but at lap 86 a loose oil line fitting on the No. 01 Pontiac caused Nadeau to fall eight laps down. Nadeau finished 35th.

The day's third yellow produced the highest attrition, when the No. 48 Hendrick Chevy of Jimmie Johnson made contact with the No. 40 Ganassi Dodge of Sterling Marlin creating tire problems for Marlin. Marlin's tire blew about half a lap later causing a multi-car wreck on lap 23. Also involved in the incident were Bobby Labonte, Jack Sprague, Tony Raines, Todd Bodine and Kevin Harvick.

"It really started the lap before," said 39th place finisher Marlin. "One of the slow cars stayed out and we pretty much had it passed. He was down in turn one, and it was a give and take deal. He knew we were coming, and the 20 car was racing down in the corner.

"I had to check up to keep from wrecking us both. We went back down in three and four and Jimmie (Johnson) and them got a run on me. We came up off four and it looked like Jimmie got a little on the loose side. He didn't mean to. When he got loose, we hooked bumpers and it turned us both into the fence."

There were seven cautions for 33 laps.

For the second week in a row Greg Biffle in the No. 16 Roush Ford is the highest finishing rookie in 12th.

"This gives us something to work on," said Biffle. "Mainly just bringing home a good car from here without being torn up was our biggest thing."

The race for the championship continues to heat up, as Stewart moves within 57 points of first place Kenseth. Waltrip is third, followed by Earnhardt, Jr., Craven, Busch, Johnson, Blaney, Joe Nemechek, and Sadler.