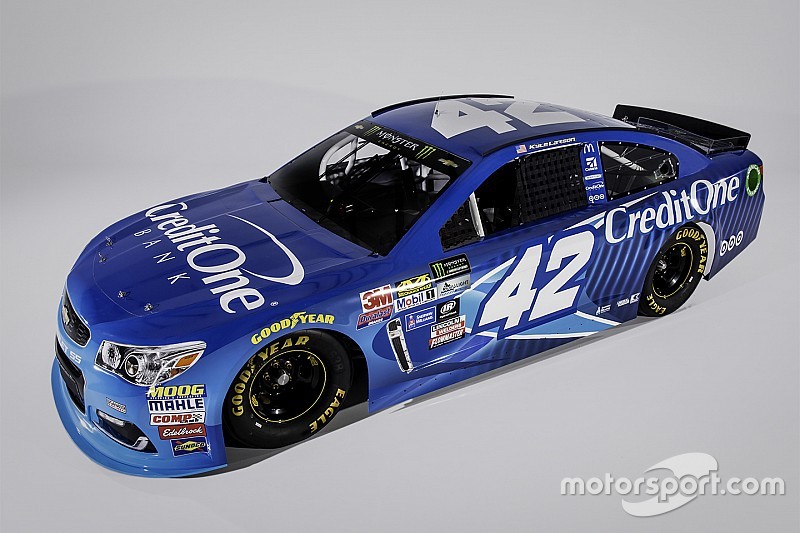 Credit One Bank will sponsor the No. 42 Chip Ganassi Racing Chevrolet and driver Kyle Larson in multiple races over the next two years.

Credit One, the Official Credit Card of NASCAR, announced its partnership with Ganassi last February during Daytona Speedweeks. Credit One first appeared on the No. 1 Chevy with Jamie McMurray in the spring race at Richmond International Raceway — and for four additional events in 2016.

Credit One will debut with Larson for The Clash on Feb. 18. The sponsor will be featured on both the Nos. 1 and 42 at Las Vegas Motor Speedway, Credit One Bank’s home track and with Larson as a primary and associate sponsor throughout the year.

“We received such a positive response from our first year of partnership with NASCAR and Chip Ganassi Racing,” said Laura Faulkner, Vice President of Marketing Communications, Credit One Bank. “We are excited to grow our support this season and continue to bring the benefits of the Credit One Bank NASCAR credit card to millions of race fans.

“Extending our sponsorship to Kyle and the No. 42 team is a natural next step for us, while we continue to back Jamie in his chase as well. We look forward to seeing the No. 42 Credit One Bank Chevrolet SS on the track throughout the season.”

Larson, 24, had a breakout season in 2016. Under the direction of Chad Johnston, Larson won his first career Monster Energy Cup race at Michigan International Speedway and qualified for the Chase. In Larson’s third full season in Cup, he posted a career-high 10 top 10 finishes.

“I can’t wait to get back on track this year and pick up where our team left off last season,” Larson said. “This time last year we were getting used to some new guys on our team, so we’re really excited to start off this season with some good chemistry and an idea of what we all need to do each weekend to contend for wins. We’re also looking forward to our first season with Credit One Bank as a part of our team.

“They were a great partner with Ganassi and NASCAR last season, so we’re excited for some great races with them this year.”

The alignment with Larson comes after Target announced it was scaling back its involvement in motorsports after 27 seasons with Ganassi. The company’s marketing focus changed last year after chairman Brian Cornell took the reins. Despite 11 titles and four Indianapolis 500 wins, Target ceased its sponsorship of JGR’s IndyCar teams at the end of last year.

Chip Ganassi Racing will celebrate its 17th season in NASCAR in 2017.

“Having Credit One Bank grow with our team is not only a testament to the strength of our sport, but also highlights the enthusiasm we have this season for our teams at Ganassi as both Jamie and Kyle look to build off of a strong 2016 season.”