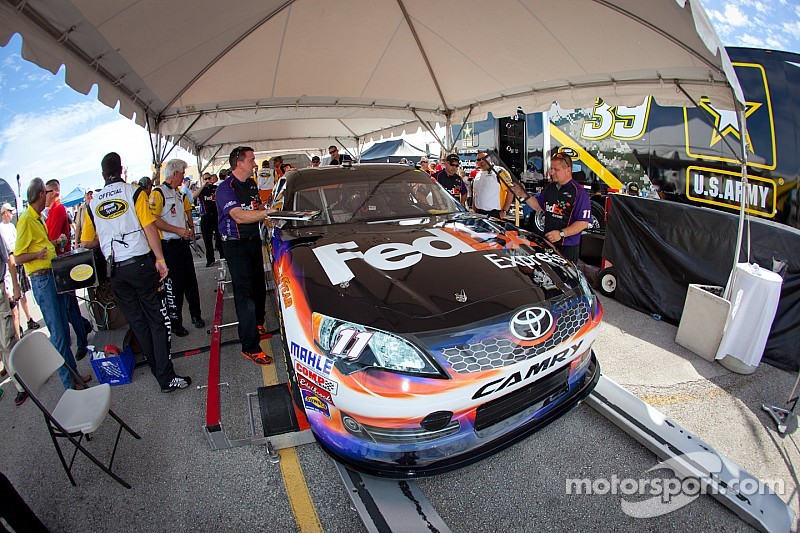 The penalties against Denny Hamlin's team are harsh, but NASCAR may have to consider the ultimate penalty - voiding a win to make a real impression.

NASCAR pounded the No. 11 Joe Gibbs Racing team with the largest penalty in the history of the sport on Tuesday for a variety of rules infractions that were uncovered during post-race inspection at Indianapolis Motor Speedway.

But will it be enough to stop further shenanigans?

The original report from the sanctioning body was “a possible issue” with the rear firewall block-off plates – that was after Jeff Gordon finished his post-race press conference.

The plates just scratched the surface of issues that inspectors discovered after further investigation at the NASCAR Research and Development Center in Concord, N.C.

In addition to the catch-all phrase - “Actions detrimental to stock car racing” (sec. 12-1) – Hamlin’s Toyota failed to comply with a laundry list of violations including 20-2.1 K (devices or ductwork that alters airflow), 20-2.1 L (not sealing seams on sheet metal where air can flow through to offer a possible advantage), 20-3.4 (positioning of frame rails and mounting of firewalls, floors, tunnels and access panels in relation to the driver’s security while under competition) and 20-3.4.5 (re: specific firewall panel/block-off plate material – magnetic sheet steel a minimum of 22 gage – as well as location and installation procedures) all designed to improve the downforce of the car.

No, Hamlin did not have a push to pass device on his car but considering that he qualified 27th and finished third with four tire pit stops, his performance was unexpected.

We were seconds off for the first two days

Sure, his JGR teammates Kyle Busch and Matt Kenseth were stout. They finished second and fourth, respectively. However, no one improved their position from the start of the race to the end as much as the No. 11 car did.

Prior to the race, Hamlin acknowledged “we were seconds off for the first two days”. He credited Mother Nature with his Camry’s ability to come to life on Sunday.

“Until the track gets hot and slick, out car just doesn’t come in,” Hamlin said after the race. “Obviously, it got hot enough for us today.”

Hamlin added no other car could pass him during the race. But when he would pit, Hamlin had no problem racing his way from mid-pack to the front in a matter of laps. He pitted from sixth-place on Lap 90 and dropped to 29th. After the third caution on Lap 98, Hamlin had climbed to 13th. Although he pitted again on Lap 127, by lap 130 Hamlin was sixth.

Hamlin had 37 “quality passes” (the number of cars he passed while racing among the top 15 in the running order under green flag conditions). Of drivers that finished in the top 10, only Austin Dillon (39) passed more cars under green and only Dillon and race winner Jeff Gordon had fewer cars pass them than Hamlin did.

One veteran general manager called the situation “an old trick with a new fine.”

NASCAR assigned a P5 designation to the infractions (the most severe is P6), docking the team 50 championship driver/owner points, a $75,000 fine for crew chief Darian Grubb.

Since the infractions were discovered in post-race inspection, NASCAR increased the penalty by 25 points and $50,000. Grubb and car chief Wesley Sherrill will serve a six-race suspension and a six-month probation period.

Although Joe Gibbs Racing said it will appeal the penalties, the team decided that Grubb and Sherrill will begin serving their sentences this week. Consequently, if the violations are not overturned, both would return in time for the first race of the Chase at Chicagoland Speedway on Sept. 14.

But again, is the fine of $125,000 and 75 points enough to get the paddock’s attention? Hamlin earned more than twice that in the Brickyard 400. His point loss? With a win, he’s still in the Chase. Probation? Don’t make me laugh.

With NASCAR’s new winner-take-all format to determine the champion at Homestead-Miami Speedway and millions at stake for the victor, what’s a six-figure fine? It’s peanuts to one of the top tier teams.

And since the sanctioning body has never taken away a win since the Chase began, what’s to make them start now? If NASCAR can’t clean up a mess such as the one caused by the No. 11 team at Indy simply because there was no way they would rain on Gordon’s parade, then why would they overturn whoever ends up on the Champion’s stage at Homestead?

Competitors will always push the limits of the rules – and sometimes beyond. If NASCAR doesn’t push back now, Homestead might be a season finale we’ll never forget, but not for the right reasons.

How do you think NASCAR should have punished Denny Hamlin, if it all? Vote now and let Motorsport.com know your thoughts!

Chevrolet looking for five in a row at Pocono

The 2015 Camry is taking shape for Sprint Cup competition