CONCORD, N.C. (March 25, 2014) – Icons from the worlds of NASCAR and music came together at Charlotte Motor Speedway Tuesday when Dale Earnhardt Jr., Rick Hendrick and Ray Evernham helped unveil one of Elvis Presley’s most prized vehicles, which will be on public display during the Charlotte Motor Speedway AutoFair hosted by OldRide.com, April 3-6.

The car was unveiled after undergoing an extensive preservation to restore it to the condition it was in when Elvis last drove it in 1976.

“It has never left Graceland. It has been there in the auto museum in Graceland. This car has not been run in 25 years,” said Jack Soden, CEO of Elvis Presley Enterprises. “If we had fully restored it, it would be a 1973 Stutz. But leaving that little bit of that DNA of Elvis – the original seats in the condition they are in, little nicks here and there – that makes it Elvis’ and we wanted to preserve that.” 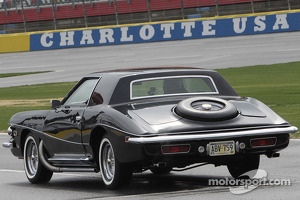 Rumored to be among Elvis’ favorite cars, the 1973 Stutz Blackhawk III was also well-known as being the last ride for The King of Rock ‘n’ Roll, who was last photographed driving the car into the gates of Graceland just hours before he died. Before Earnhardt Jr. drove it into Monday’s press event, no one had driven the car since Elvis.

“I’ve been over to Graceland a couple of times and seen the car, but I didn’t read up on the plaque that that was the car that he drove the night that he passed away,” Earnhardt Jr. said. “It’s pretty incredible to be able to sit in it. They haven’t really touched the interior of this car since he drove it. I’m a big fan, and knowing how big an entertainer he was and how much he meant to a lot of people, it really meant a lot to me to be able to drive the car today.

“It’s got his personality written all over it. You look at the side pipes and the lines – its interior… From the inside out, it’s got a lot of personality.”

Hendrick’s love of cars is no secret, but even he admitted being more than a little awestruck during Monday’s event. Hendrick rode in the passenger’s seat as Earnhardt Jr. drove a couple of laps around Charlotte Motor Speedway as part of the press event.

“I’ve seen his movies. I’ve been to his concerts. I never thought I would get to sit in his car,” Hendrick said. “I never thought we’d get to see it or touch it. To be able to sit in it, that was something. That was really special.”

Soden said he was excited to see the car driving around Charlotte Motor Speedway and eager to see the fans’ reactions when it is on display during the AutoFair.

“To unveil it for the event next weekend is just terrific. There could not be two finer people to have succeeded Elvis in getting in that car and taking it for a drive,” he said. 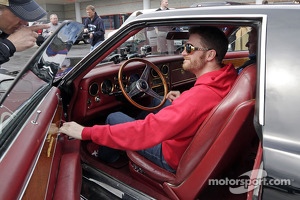 Dale Earnhardt Jr. gets behind the wheel of Elvis' prized 1973 Stutz

While the 1973 Stutz Blackhawk III will be the centerpiece attraction of the Nationwide Insurance Classic Car Showcase Pavilion, the AutoFair will also feature an Elvis tribute artist contest, an Elvis-themed menu at the Jailhouse Rock Cafe and additional Elvis memorabilia from Graceland.

The AutoFair features more than 50 car club displays and more than 10,000 vendor spaces offering an array of automotive parts and memorabilia. More than 1,500 collectible vehicles of all makes and models will be available for sale in the car corral that rings the 1.5-mile superspeedway. In addition, up to 200 cars will be auctioned by Dealer Auctions Inc., and kids can enjoy face-painting, bounce houses, and other games and entertainment in the Play Zone.