After today's victory, Ryan Newman replied back to his crew chief Matt Borland: "You get to drive the tractor."

It was a case of necessity being the mother of prevention.

Inexplicably, Earnhardt had a loose wheel when he started the opening run in the 20th NASCAR Sprint Cup Series race of the year. He had to bring the car to pit road to prevent a disastrous failure. When he left pit road, Earnhardt was a lap down at the tail end of the field.

"I'll tell you, you can't have a wheel come off here," Earnhardt said. "You're running that thing at 200 miles an hour at the end of the straightaway. You don't want to take any chances. 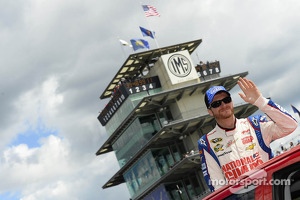 "We came in. (Crew chief) Steve (Letarte) said it was loose, and it was a good job and a good save."

The early stop put Earnhardt off sequence in the pits, but he persevered and regained track position by staying out under caution when most other drivers came to pit road on Lap 82. Ultimately, he claimed a hard-fought sixth-place finish that solidified his fifth-place position in the NASCAR Sprint Cup standings.

But that doesn't mean Earnhardt wasn't worried when his wheel began shaking soon after the opening green flag.

"Yes, a little bit," he confessed. "But it's still a long race, and Steve is a good strategist, and we ended up all right. The car had good speed. We finished about where we should."

Before the race, Earnhardt learned of the death of his uncle, Randy Earnhardt, brother of his late father, Dale Earnhardt Sr.

Randy Earnhardt passed away Sunday at age 60 after a year-long battle against cancer.

"It was really tough," Earnhardt said after the race. "He helped me through a lot of challenges when I was trying to become a race car driver. He was there when I started driving late models. I went through the whole process of racing with Tony (Eury, Sr.) and all of them through the (Budweiser) car, Randy was always there.

"It's just very, very sad, but I am glad his suffering is over with. He is going to be missed. He was awesome, such an awesome guy. He kept things together (at Dale Earnhardt Inc.). He was in charge of a lot of different things, mainly in charge of where every nut and bolt was. He was accountable for everything…

"He was loyal to Dad, and really looked after everything that was there and that was my father's and what would have been important to him as far as material things. Randy really looked after that. It's tough. It's part of life, and it's hard to get used to. I'm just glad his suffering is over with. He was having a real hard time. I loved him dearly and will miss him a lot."

Brickyard winner Ryan Newman and crew chief Matt Borland are an effective pair, as they proved once again in Sunday's race. 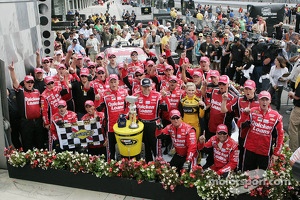 Given that Newman has been given his walking papers from Stewart-Haas Racing, effective at the end of the year, will Newman and Borland market themselves as a package deal to a prospective car owner.

When asked about his status at Stewart-Haas, Borland was noncommittal.

"At this point, I'm not sure what next year is going to bring," Borland said. "Right now, 100 percent of my focus and our whole team's focus is on doing as best we can in these next six races (before the Chase field is set) and the next 16."

"Going to open up a fruit stand in Statesville if anybody is interested," Newman joked.

"Do I get to drive the tractor?" Borland asked.

"You get to drive the tractor," Newman said with a smile. "You also get to change the oil in the tractor."