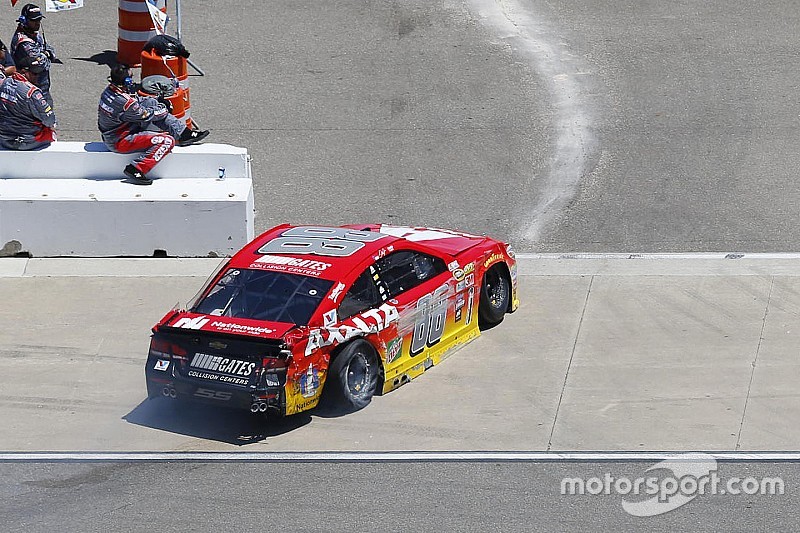 Dale Earnhardt Jr. will likely take another hit in the standings after suffering his fourth DNF of 2016.

On Sunday, Earnhardt was running 21st — working the second lap after the Lap 60 restart — when he was running three-wide with Chris Buescher on the inside and AJ Allmendinger on the outside. As the field poured onto the backstretch at Michigan International Speedway, Buescher washed up into the No. 88 Chevy and collected Allmendinger in the process.

“The 34 just drove into the left rear quarter panel, I just don’t know,” Earnhardt said. “On the restarts and all that, you have a responsibility to try to take car of everybody out there — even when you’re three-wide. I’m disappointed in that.

“We had a pretty good car and we were just taking our time there. The car was great. So it’s a shame.”
Earnhardt entered the weekend with five top fives and six top 10 finishes in the first 14 races of 2016. But the No. 88 Hendrick Motorsports crew was looking for a solid weekend at the two-mile track where Earnhardt has two wins eight top fives and 14 top 10 finishes in 33 starts.

Although NASCAR introduced a new lower aerodynamic package for Michigan this weekend, Earnhardt was pleased with how his car handled following Happy Hour on Saturday. His early impression of the new configuration under race conditions?

“It’s not a whole lot different than the other package,” Earnhardt said. “I don’t like talking about packages too much.”

Earnhardt is scored 39th and out of the race. He’s suffered three DNFs prior to Michigan at Daytona, Talladega and Dover.

Kyle Busch's day ends in a "fireball" at Michigan