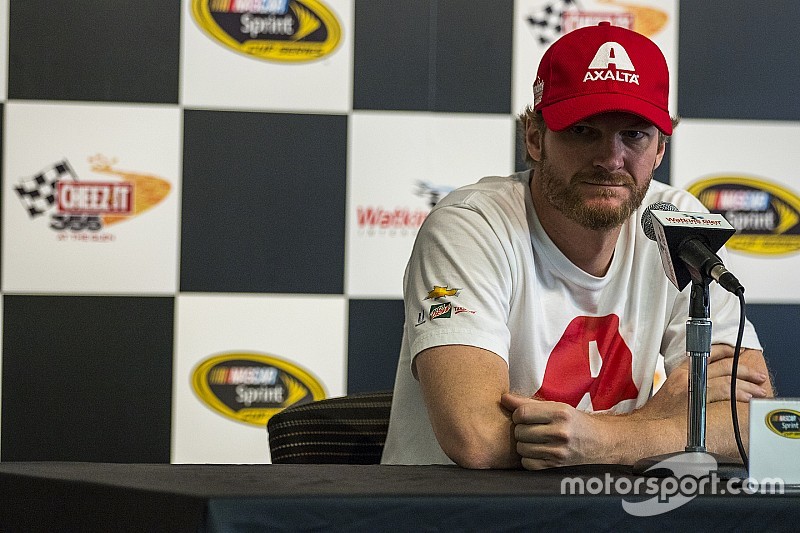 Dale Earnhardt Jr. said he has never contemplated whether he should stop racing during his extended recovery period from his latest concussion.

“Our intentions are to get (medically) cleared and get back to racing,” Earnhardt said Friday during a news conference Friday at Watkins Glen (N.Y.) International. “My doctor thinks to get through the therapy and the symptoms you don’t need to be adding stress to your life because the stress will slow down the process.

“So, going into those kind of conversations aren’t even necessary at this point. The point right now is just to get healthy – just to get right. I’m not thinking about the ‘what ifs.’ “I’m listening to my doctors and went into this with the intentions of getting back in the car when we get cleared.”

"The thing happened so awkward"

Sunday’s Sprint Cup Series race at the Glen will be the fourth race Earnhardt will miss while recovering from a concussion his doctors said came from a wreck in the June Michigan race.

"I didn’t have a massive accident. I didn’t have really crazy symptoms. This thing happened so awkward where we had the accident at Michigan and the symptoms crept in weeks later," Earnhardt said.

“I didn’t think this was that serious, but it had gotten to a point where I definitely didn’t need to be in the race car. From the very onset of this, it was ‘This will go away in a couple of weeks, I’ll miss a race or two and we’ll get back in the car.’ I’m thinking about well it’s going to put more pressure on me to win a race and get in the Chase and all that stuff."

Hendrick Motorsports has already announced Earnhardt will sit out at least through the Aug. 20 race at Bristol (Tenn.) Motor Speedway. Recently retired HMS driver Jeff Gordon is driving Earnhardt’s No. 88 Chevrolet through the Bristol race.

“It’s frustrating that I’ve had to miss this many races. When we first went into the doctor’s office, we never anticipated being out this long. But, unfortunately, it’s a slower process,” he said.

“There are no guidelines or rulebook or consistent history on how long this takes to clear up. We’re just having to be patient. My doctors feel great about the opportunity that I will not only be healthy again, but they can make my brain stronger to make it withstand a common event.

On his weekly Dirty Mo Radio podcast this week, Earnhardt said his main issue now is with gaze stability – being able to fix on an object on a great distance and stay there with head movement.

"You can’t scan and see it. Doctors can’t see it. They really rely on the patient to be honest and upfront. So, when you can talk to someone who has been through it, it’s a great experience and it helps both of you, to be honest with you. So, there’s been a lot of that. And I really appreciate those calls and relationships I have with those guys.”

What brought Jr. to the track

Asked what prompted his visit to the track, Earnhardt said he "just wanted to come see everybody."

"I got to go see my guys they would be really upset if I didn’t. I am real happy to see all you guys and just whoever I run into on the way from A to B. It’s been so weird not to be at the track," he said.

"You don’t really realize how many relationships and friendships you have and how much you appreciate them until you are not able to have access to it. Just to be able to come to the track was something I was excited about.

"I’m going to go into the garage to the hauler and I will stick around until after practice is over and things kind of calm down, so I can see my guys when they are not working. Then I’m probably going to go back home.”