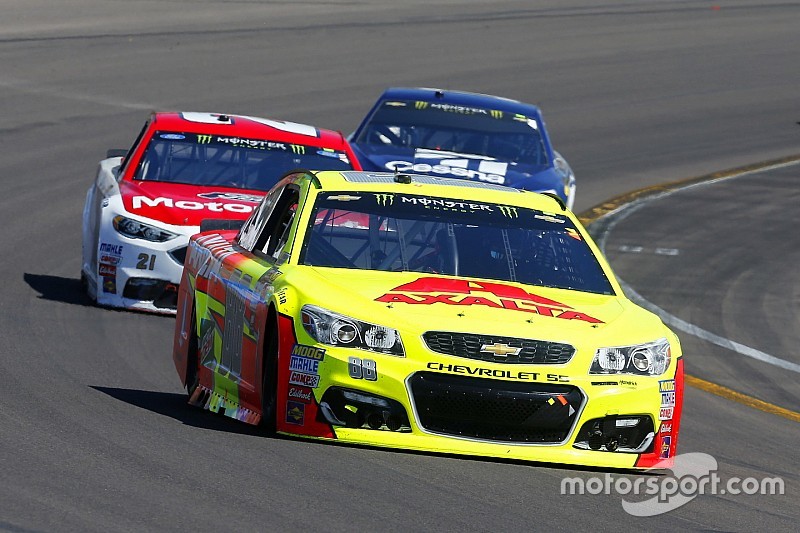 During the Monster Energy NASCAR Cup race at Phoenix Raceway, Ryan Blaney got frustrated while running behind Dale Earnhardt Jr. He keyed his radio mic and said the following: "F***ing tires are gone, because the f***ing 88 car is a d**k."

While the race was ongoing, Earnhardt's wife Amy playfully responded to the radio comments via Twitter.

"Yeah, Ryan Blaney is my neighbor," explained Jr. on his weekly podcast. "He rents the house that (Brad) Keselowski used to live in that I sold to Brad and so, he comes over and he hangs out, we drink a little beer after a race or two. Not as often as we would like, but we do spend some time hanging out.

He has a RZR or something so I let him ride the trails on the property ... so obviously, we get along great. I'm happy for him, excited for his future. He's one of those good guys, but I don't know what that's all about."

Blaney took to Twitter after the race to apologize for what he said, which was obviously done in the heat of the moment.

But now Earnhardt is using that apology tweet to poke fun at the young driver.

"He said he was hot in the car and when he's hot, he just can't control himself," Jr. said on the podcast. "It's going to be 60 degrees in Fontana so he should have an easy go of it, so you can actually race him without losing his cool. If it's hot, he's liable to call you a d**k I guess."

He then added, "I mean, I've said some bad words Sunday, but I don't know that I called anybody any names. We do say effing idiot a lot, but we don't say number X car is an effing idiot. I try not to call anybody out because it will get on Twitter or it will get in the media and you have to talk about it on your podcast ... It will be on radioactive, we'll probably get asked about it this weekend.

"So I try to avoid those situations." And it's probably a safe bet that in the future, the driver of the No. 21 will try to do the same as well.