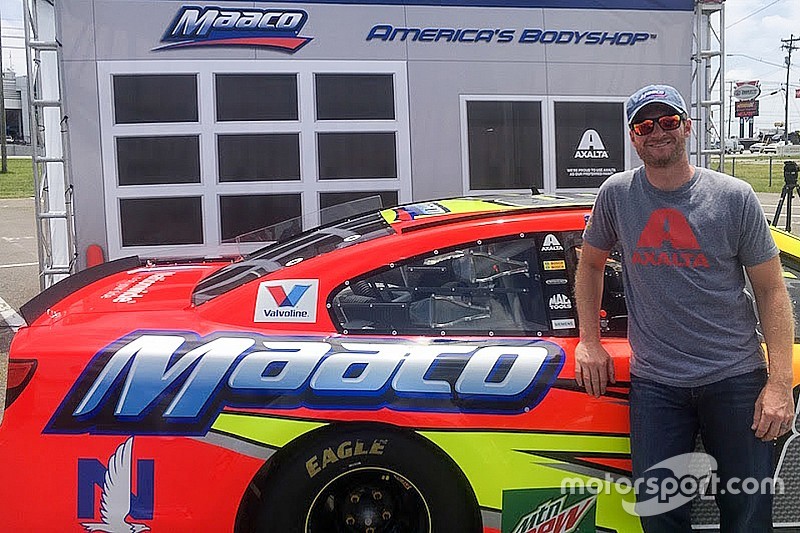 Prior to partnering with the auto painting and collision repair specialist, the driver of the No. 88 Chevrolet had plenty of opportunities to hear the slogan, “Uh-oh, better get Maaco.” Earnhardt has endured his share of accidents on and off the track.

He admits there’s been a few wrecks that even Maaco “couldn’t have fixed.”

“I flipped my S10 pickup truck driving to my mamaw’s for a family reunion on Christmas Day one time,” Earnhardt said. “I was 18-19 years old then, working at the dealership as a service mechanic. My sister got me a CD player, I was fiddlin’ with it and drove off the road, rolled a couple of times.

“Dad laughed, because he actually flipped his car when he was 18. So instead of being really mad and getting my butt chewed, we laughed about it. Boy, did I learn my lesson.”

Through an alliance with Axalta, one of Earnhardt’s primary backers, Maaco will make its NASCAR debut this weekend for the driver’s final run at the All-Star Race.

Earnhardt was just 25 when he made his debut in the event during his rookie season. The No. 8 Budweiser crew was on a roll, having won at Texas Motor Speedway and Richmond International Raceway in the first 11 races of the season to qualify for what was then The Winston. Earnhardt won the race in his debut but was so taken by the enormity of the event that it took a while to sink in.

“We were feeling pretty good about ourselves,” said Earnhardt of the No. 8 Budweiser team in his rookie year. “We’d won at Texas and Richmond. And then we came here. I personally was just felt real lucky to be in the race. It never crossed my mind, ‘What do we have to do to win? How do we win?’ I was like, ‘Wow! I can’t believe I’m in it.’ I couldn’t get over that to think of anything else — about winning and so forth.

“But (crew chief/uncle) Tony (Eury) Sr., (car chief/cousin) Tony Jr., were probably always thinking about winning it. They just had so much confidence and arrogance and cockiness about it. They weren’t happy unless you were at the top of the board in every practice. And I mean it. They were hot if you weren’t in the top 10. It was a bad day.”

Earnhardt recounts the closing laps vividly — including passing his father and defending Cup champion Dale Jarrett for the win.

Earnhardt wouldn’t mind having a second All-Star victory to bookend his career.

“That would be incredible,” Earnhardt said. “We’re looking for any kind of success we can have this year. We’d certainly like to celebrate a victory or two this year. To get one in the All-Star race on our way out would be great, especially with a special partner like Maaco aboard for this race.

“This is a great looking car. I can't imagine it looking even better than in Victory Lane.”

Roundtable - How can NASCAR make the sport safer?