During the week Patrick has been surprised by the surge in female backers including visits by the daughters of NASCAR drivers Carl Edwards, Jimmie Johnson and Jeff Gordon.

Since winning the pole for the Daytona 500, Danica Patrick has been seen and heard in just about every community across the United States and overseas, too. While many are getting tired of the Danica stories, others are thirsty to hear more.

During a tune-up session today at the Daytona International Speedway, she logged 32 laps and drafted with several of the front-running drivers. And she reported she’s ready for Sunday’s Daytona 500.

It has given me a chance to say how incredible this team is...

“We saw how challenging to pass here, so it is important to be out front,” she said during a press conference today. “I feel comfortable because the car is nicely balanced to run in a group, so it was nice to get that running in. I am glad I got to run with those guys today.”

Until now, crew chief Tony Gibson has had her on a strict schedule and didn’t want her to get into any situations that would wrinkle the car and knock her off the front row for NASCAR’s Super Bowl of racing. And those restrictions have now been lifted, which pleased her to no end.

She says she has enjoyed the spotlight. “It has been nice and fun. I feel flattered and it has given me a chance to say how incredible this team is, how good Tony Gibson is and (sponsor) GoDaddy.”

Regarding the perceived pressure, Patrick isn’t rattled. “I put plenty of pressure on myself as I want to win the race and run strong, doing all those things for myself. When you are already being watched, as it did at Indianapolis, it will be a big challenge and I just need to hold my own. And it won’t do me any good to worry about what can happen.” 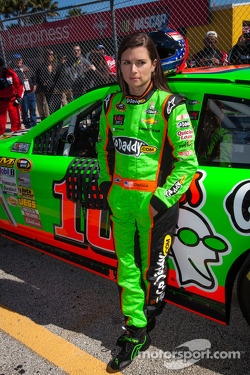 Although Patrick likes to be known just as a driver and not as a female driver, she said she has been taken back by the surge in female backers, particularly among young girls. And she was particularly moved when three drivers – Carl Edwards, Jimmie Johnson and Jeff Gordon – brought their daughters to her motor-coach for introductions. “Carl came over with his daughter, and he said she was eager to see me in real life because to her I am a mythical creature that doesn’t exist. She had green GoDaddy shoes on.

“Jimmie Johnson brought his daughter over, too, and that’s pretty flattering. You can only lead by example and I don’t necessarily be my example to be to step outside the box and be a girl in a guy’s world. If you have talent, you should not be afraid to follow-through and feel like you are less classified to do the job because you are different.”

Gibson said little girls have flocked to the garage windows of the team’s garage, and they have penned best wishes to the team. He also said he has handed out several dozen lug nuts to young ladies, writing the No. 10 on each one.

Patrick is rarely lacking in confidence, and she believes she has a shot at victory. “Pole winners are said to have a 17 per cent chance of winning the race, someone told me,” she said. “I feel comfortable in the draft and for me, it is about finding out how to pass cars and how to use them in the best way possible. To be honest, I will probably get shuffled back and I know I am a rookie and inexperienced, but I will do the best job I can to win.

“There’s a part of me that feels like I have been around quite a while. I know a lot of these drivers and feel comfortable being around them. But when I get out there in situations I am unfamiliar with, that’s the rookie part.” 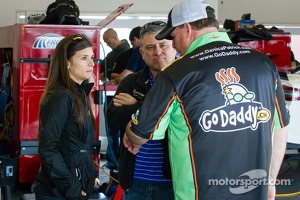 Gibson is more than confident with Patrick’s abilities, and he believes she can win the race. “I have 100 per cent confidence in her skills and ability. She has the talent to do it,” he said, going on to say that no one believed Derrike Cope had a chance to win and he did it. “I told her to treat it (the race) like a video game and just go after it.”

Patrick, Gibson, the GoDaddy team and 42 other competitors are eager for Sunday’s race to begin, and they all want to get after it. Should Patrick do well, her hours in the spotlight will continue; if not, they may well subside. But for now, she occupies center stage and is comfortable with her leading lady role.