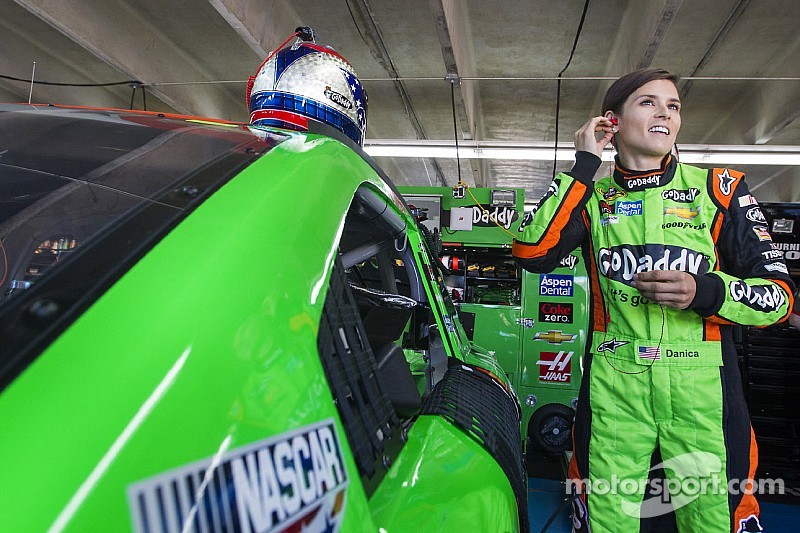 Danica Patrick probably has one of the best records of a driver never to win the Indianapolis 500-Mile Race. Six top-10 finishes in seven races, including a fourth in 2005 and a third in 2009.

But having focused on her big transition to NASCAR since 2011, the 500 is now just a memory.

Which brings us to the Brickyard 400 – the 160-lap stock car race which she debuted in last year, finishing 30th. And while it’s 100 miles shorter than the 500, a lot of people who have dreamed about winning the 500 have actually won the 400.

I don’t care what I drive around Indy, I love being there. I just like everything about it. I like the facility.

Jeff Gordon, a four-time winner of the Brickyard 400, grew up wanting to race IndyCars before he moved south to take on NASCAR. John Menard tried unsuccessfully for 20 years to win the Indy 500 as an owner, then won the ‘400’ with son Paul in 2011. Jimmie Johnson, who was a fan of four-time Indy 500 winner Rick Mears, thought about driving in the 500 but has managed to win the 400 four times.

Patrick’s teammates have experienced Indy, as well, with Tony Stewart failing to win the 500 in five starts, but capturing the 400 in 2005 and 2007. Kevin Harvick also grew up as a Mears fan and took the checkered flag in the 400 in 2003. And Kurt Busch has never won either race but this past May attempted “The Double,” finishing sixth in the Indy 500 and 40th later that day in the NASCAR Sprint Cup Series Coca-Cola 600 at Charlotte (N.C.) Motor Speedway. An engine failure prematurely ended his attempt to complete The Double at Charlotte.

Patrick and crew chief Tony Gibson will bring a brand new No. 10 GoDaddy Chevrolet SS to the Brickyard 400 as chassis No. 10-894 has never been used. When they brought brand new Chassis No. 10-837 to Kansas Speedway in Kansas City in May, Patrick started ninth and finished seventh.

Patrick hopes that luck will continue at Indy and she can score another top-10 finish at a place that has been so good to her in the last decade.

What did you do during the off week?

“I presented at the ESPY’s on Wednesday night and then went Lake Tahoe to cheer for Ricky (Stenhouse) in the American Century Championship. It was fun to watch him play golf and it was a fun experience. I’m ready to get back, though, and I think the guys got some much-needed time off and I think we’re ready for the final 17 weeks.”

Indianapolis has always been a special place for you. Talk about running there.

“I don’t care what I drive around Indy, I love being there. I just like everything about it. I like the facility. And, to me, the special thing about Indy is, obviously, I’ve had great experiences, but it’s about the track. It doesn’t matter what kind of car I drive there, I’ve had great experiences, memories. So that’s what I like so much about it. And I love the tradition. The older I get, the more I realize how much history and tradition plays a role in what’s important and what matters and what means the most to you.”

Compare driving a stock car at Indianapolis to driving an Indy car.

“It’s just about finding a balance with the car out there, which is no different than in an Indy car. You’re just trying to find a balance. All you’re doing in an Indy car is trimming it out and, if I could have more downforce in these cars, I’d probably take it because, in an Indy car, we learned very quickly that it’s about how much throttle you could carry around. The stock cars get very low in the corners, and that can be a little bit of a danger in an Indy car, especially if you get just a little bit too low and get a little loose. So that’s a little bit different, I suppose, but nothing that was terribly unexpected. It did feel a little funny driving through Gasoline Alley the first time. We used to walk it. And I’m used to seeing the ‘Alley Cats’ (legion of local fans who have been a fixture at the entrance to Gasoline Alley during the Indy 500 month of practice, qualifying and the race for more than four decades) and I didn’t see them there. I just saw a bunch of ‘Yellow Shirts’ (security guards) and that was nice. But I didn’t see any ‘Alley Cats.’”

When you were in Indy cars, which turn gave you the most trouble at Indy?

“Turn one. I always feel like turn one is just – it has the most amount of issues, for whatever reason. I don’t know if it’s partly because you get there a little quicker because (turns) two, three and four are a little bit more smooth and the arc is nice and smooth through the corner. I don’t feel like there’s as much adjusting. I don’t know what it is, but turn one has always been the issue no matter what car I’ve been in. So that was my answer for Indy cars, and it’s my answer for stock cars. It always gives you that little bit of a loose feeling getting in, at times. And, with these cars especially, I feel you have to set them up for the long haul. You have to set them up for the whole run as opposed to, where in IndyCar, they have so much downforce and grip that you could set it up and it’d stay like that through the whole race or the whole run. So there’s a little bit of sacrificing and compromising on the car as far as what you have at the beginning so you have a good car at the end.”

Talk about what it’s like when you drive through the tunnel at Indianapolis and get ready for a race weekend.

“I think the best thing about coming back is that it feels familiar and it feels comfortable. I like seeing it. It feels very comfortable, very familiar. I just feel like I’ve had a lot of different experiences here that can help me and, again, it’s just a special place where I feel like, from the beginning, I’ve always really believed that you have to show this track respect and it will hopefully show you the respect back. I’ve always thought that and, especially in IndyCar, this place can bite you pretty big. I don’t think it’s too much different in a stock car, to be honest. It’s just a very familiar place. We spent so much time there during the month of May that it becomes like a second home, almost. It’s not like the Indy 500 was a three-day show. You spent just about the entire month there. My parents live outside of Indy, now, as does my sister and her husband, so it’s nice to come back.”

A.J. Allmendinger goes in search of Indianapolis glory with JTG