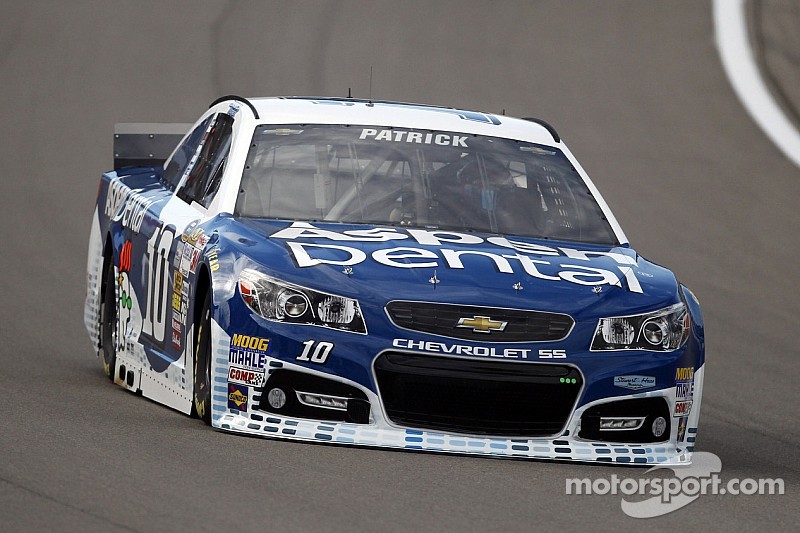 The team is running better than it ever has.

KANNAPOLIS, N.C. (Oct. 1, 2014) – Danica Patrick had plenty of reasons to smile through the last few weeks.

She has finished 19th or better in five of her last seven starts, including a career-best finish of sixth Labor Day Weekend at Atlanta Motor Speedway.

Patrick has qualified 18th or better in the last four races and the team is running better than it ever has.

In fact, the only reason not to smile is that rain postponed some of the Stewart-Haas Racing (SHR) four-team test this week at Charlotte (N.C.) Motor Speedway as they look to get even better.

But, for Patrick, she knows this is the week she and the crew chief Tony Gibson-led team head to Kansas Speedway in Kansas City for the second time this season. And she is hoping they can pick up right where they left off in May.

Patrick started seventh and finished ninth – one of only two times in her career she has started and finished in the top-10, with the other being the 2013 Daytona 500 at Daytona (Fla.) International Speedway, where she started on the pole and finished eighth.

She ran well throughout the whole night at Kansas last May and was as high as third late in the race before finishing seventh.

The same car used at Atlanta

When Patrick comes back to Kansas, her No. 10 Aspen Dental Chevrolet SS for SHR will be a familiar one.

She will use Chassis No. 10-838, the same car she used during her historic sixth-place run at Atlanta.

That sixth-place finish is the highest finish by a female at Atlanta. The previous record was Janet Guthrie’s 10th-place finish on March 19, 1978. Only a fifth-place result by Sara Christian in a Sprint Cup race on Oct. 2, 1949 at Heidelberg (Pa.) Raceway tops Patrick’s finish. Christian also finished sixth at Langhorne (Pa.) Speedway on Sept. 11, 1949 and Guthrie finished sixth at Bristol (Tenn.) Motor Speedway on Aug. 28, 1977.

Though she ended up one spot behind Christian’s record at Atlanta, it was Patrick’s third top-10 of the year to go with her seventh at Kansas in May and eighth in July at Daytona.  If she scores one more top-10 in 2014, she will tie Guthrie, who had four in 1977.

Patrick is hoping that comes at Kansas, where she has run well in the NASCAR Nationwide Series and the IndyCar Series, as well.

She raced there twice in the Nationwide Series and never started or finished lower than 15th. And, in IndyCar, she won the pole in 2005 and finished fifth in 2009.

Weekend in blue and white

In a rare change from her normal green racecar, Patrick’s machine this weekend will sport the blue and white colors of Aspen Dental, one of the largest and fastest-growing networks of dental care providers in the U.S. with more than 460 locations in communities across 28 states, providing millions of Americans with access to quality, affordable dental care.

Patrick is hoping she and the No. 10 team will have something to smile about after Kansas.

Driver of the No. 10 Aspen Dental Chevrolet SS for Stewart-Haas Racing

“I’ve always liked going to Kansas. It’s a nice facility and I’ve got a lot of experience there compared to some places, even if a lot of it is in IndyCar. I think our 1.5-mile program is better than it was last year, so I feel good going into this week. We had a great run in the spring and hopefully we can do the same in the fall.”

There are new colors on the car for you this week with the blue and white of Aspen Dental. Talk about that.

“We do have different look this week. I’m excited about it. We’re lucky to have Aspen Dental on the car this week at Kansas. I’ve done a lot of work with them this year around their Healthy Mouth Movement, a community giving and oral health education initiative which just visited my hometown of in Roscoe, Illinois and delivered free care around the clock for 24 hours.

All across the country, they’ve given back more than $1 million in free care to people in need this year. I didn’t realize until I started working with them that lack of dental care is a serious issue. Last year, 100 million Americans didn’t visit a dentist, and millions more live in communities with little or no access to dental care. It’s an issue that affects a lot of hard-working people, including NASCAR fans, who are often living in pain. Aspen Dental decided to do something about it, and that’s why I’m proud to partner with them.”

Describe your Kansas race in the spring and your seventh-place result.

That was the biggest thing. When the race started, it was about finishing the weekend off right and just staying up there. You know you’re going to go up, you’re going to go down a little bit, and we sure enough did that. But we more than held our own through the whole race. I’m extremely proud of this crew for building a car that was just awesome. It was so good on restarts and long runs and tires getting old.

What was the racetrack like? Some drivers said it was tricky.

“Oh, it was tricky and you really had to be careful how hard you went into the corner. It was easy to get it to step out on entry. So you had to be a little bit careful. But that’s all part of the game. Turns one and two were pretty good. For me, I could run any lane and that really helped me out.”

Dale Jr. as Knight Rider ... You can't miss this