For Danica Patrick and the GoDaddy.com Chevrolet team, it could be argued that the 2013 NASCAR Sprint Cup Series season starts this week at Texas Motor Speedway in Fort Worth. 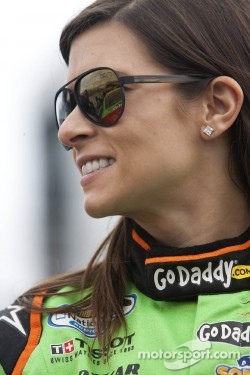 While the calendar will read November 4, 2012, Sunday’s AAA 500 Sprint Cup Series race at the 1.5-mile oval will mark the first race that Patrick and new crew chief Tony Gibson work together in preparation for Patrick’s first full season at NASCAR’s highest level.

Anyone in the Sprint Cup garage knows that the driver-crew chief relationship is the most critical to success during the 36-race schedule. But for a rookie like Patrick, having an experienced crew chief on the pit box like Gibson cannot be understated.

Gibson is a veteran who most recently won races and twice made the Chase for the NASCAR Sprint Cup with Stewart-Haas Racing’s Ryan Newman. He now moves to the No. 10 GoDaddy.com Chevrolet piloted by Patrick and brings with him a wealth of experience, including Sprint Cup Series championships as a crew member with Jeff Gordon (1998 and 2001) and the late, great, owner-driver Alan Kulwicki (1992).

While Gibson has worked with veteran drivers like Kulwicki, Gordon, Newman, Mark Martin and Bill Elliott either as a crew chief or crew member, he’s also worked with up-and-coming drivers like Aric Almirola and Steve Park. So while he can draw off his vast experience of working with established drivers, he can also understand the challenges facing drivers early in their career.

One thing Gibson won’t have to worry about this week is Patrick’s familiarity with Texas Motor Speedway as she already has competed in 11 races at the 1.5-mile oval. The downside is that nine of those races were in the IZOD IndyCar Series, which won’t offer her much helps as she makes her Sprint Cup debut at Texas this weekend. That said, the Lone Star State has been kind to Patrick throughout her career as she was second in the June 2010 IndyCar Series race and notched a third-place result in IndyCar competition in June 2007.

And in her two NASCAR Nationwide Series starts at Texas, she finished 11th in November 2010 and then eighth this past April.

DANICA PATRICK, Driver of the No. 10 GoDaddy.com Chevrolet:

What are your thoughts on working with Tony Gibson for the first time? “I know Tony about as well as I know anyone else at Stewart-Haas, other than Zippy (Greg Zipadelli). I’ve always felt really comfortable around Tony. I feel like he’s always listened to me. I feel like he has a lot of respect and I have a lot of respect for him. I get along with him great and, most of all, I trust in what they decide for me because I’m not experienced enough to make those calls. That’s why I went with a team like Stewart-Haas, because I know they’re going to give me what I need.”

How valuable will the two races you work with Gibson this year be as you look toward 2013? “Any practice we can get this year is a step ahead for next year because he can get to thinking over the winter about my driving style. We can then fine-tune the language between each other and he can understand what I mean when I describe how the car is handling. It’s just little things that will make it easier next year for both of us.”

TONY GIBSON, Crew chief of the No. 10 GoDaddy.com Chevrolet:

What are your thoughts on working with Danica for the first time? “I talked to Danica about it and our thought process is small goals – small goals and try to make improvements each practice. We just want to make small gains. We want to set forth reasonable, reachable goals for her and this race team. We have two races to get started, so we’re going to use these as kind of a test session for 2013. We want her to get confidence in us and us to get a feel for what she wants.”

How valuable will the two races you work with Danica this year be as you look toward 2013? “It’s huge. Some of the smallest things are things you just don’t think about. The communication side of it – hearing my voice on the radio, the things I’m going to be saying on the radio during the race and learning things she wants to hear during the race. Some of the strategy stuff we’re thinking about might be a little bit different than what she’s used to. It’s going to be fun in a lot of ways. A lot of the veteran drivers already have a mindset about what will and won’t work with these cars. With a new driver like Danica, she’s open-minded and has the attitude of, ‘Just feed me what you want to feed me and I’ll give you feedback on it.’ So it’s like a huge test session for us. It’s a challenge but, at the same time, it’s exciting for us because we have a driver who is brand new. She’s just so new, she’s like a sponge just absorbing information. But getting two races’ worth of communication will be huge. Her hearing my voice, me hearing her voice, knowing what she wants in the car – it’s all going to help us get ready for next year.”