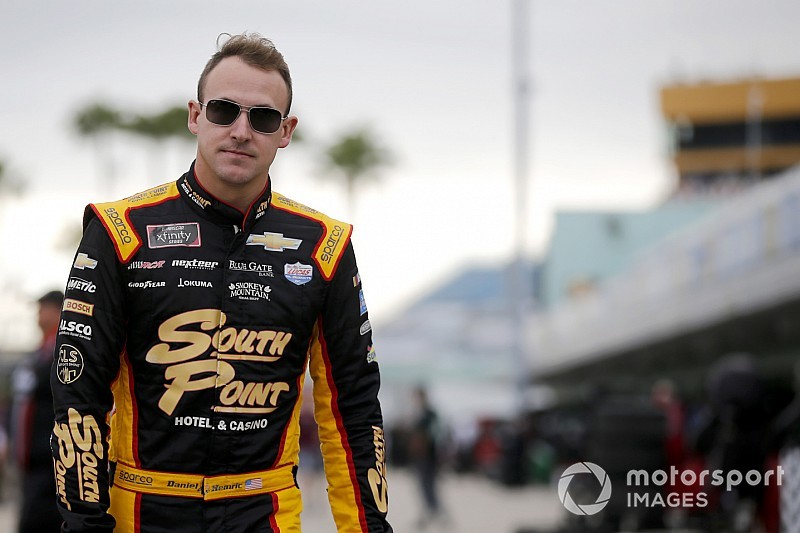 Daniel Hemric’s journey to becoming a fulltime driver in the Monster Energy NASCAR Cup Series has been “kind of like a blur,” but he’s ready to become part of a “rejuvenation” at Richard Childress Racing.

Hemric, 27, has spent the last two seasons competing for RCR in the Xfinity Series but will take over the No. 8 Chevrolet in the Cup series beginning with the 2019 season opener at Daytona.

Earlier this month, RCR announced it was changing the number of its second Cup team to from No. 31 to No.8. Austin Dillon, one of team owner Richard Childress’ grandsons, will continue to drive the No. 3 Chevrolet.

“For me the journey honestly, it’s kind of like a blur in the mix of how fast, but not fast, it’s all happened,” Hemric said this week at the NASCAR Hall of Fame in Charlotte, N.C. “But then, I can let myself think about those nights of rebuilding cars from the time the Legend’s Million happened how that catapulted my career to Late Models, to tour- type modifieds and so on.

“When I look back at those particular moments that is what makes it slow down. That is what puts it in perspective for me to be here and know that the work was put in and because of that you can still be rewarded for that.”

Still trying to reach Victory Lane for the first time

Hemric has yet to win a race in one of NASCAR’s national series, but finished fourth and third, respectively, in the Xfinity series standings the past two seasons. He finished a career-best sixth in the NASCAR Truck Series standings in 2016 driving for Brad Keselowski Racing.

While he knows some many question his ascension to the Cup series without any previous NASCAR wins, Hemric is thankful for the trust Childress has put in him.

“I go right to the thing that a lot of people can get caught up in and that is the win column of things. I know Richard knows that I was able to win at just about every level of anything I’ve ever been in until getting to the Truck Series,” Hemric said.

“But, I feel like he knows the kind of stuff I’ve drove and where it was at relative to the competition and when I was racing different vehicles. I think he knows that I’ve been able to make more out of what I had in most of those situations.

“Because of that, I think it gave him the confidence to put me in the Cup car to let me build, to let me try to take this and even build it further into the future with RCR.”

Hemric had the chance to test the waters twice in the Cup series this past year at RCR. His best effort was at the Charlotte Roval race, where he started 11th and finished 23rd but had one of the fastest cars all weekend.

“To know we are on the heels of that as well as all the changes that are coming into our sport, that is the stuff that made me feel confident that if there was ever a time to make that step (to Cup), that it was now and it was with RCR.”

2019 a "complete rejuvenation" for RCR

The change in the Cup driver lineup combined with the introduction of the new aero package in 2019 and car number change seems to have raised the enthusiasm level at RCR as the start of new season approaches.

“It’s a complete rejuvenation for the entire organization from what I can tell. To see the morale, it’s unbelievable,” Hemric said. “Not that the No. 31 was ever anything to look down on at RCR, but it’s change, and people embrace change.

“I feel like I’m trying to do the same thing and I know the folks at RCR are doing that. Everybody at the shop is pumped up. From all the little things that go into a big transition from a number switch to (the) driver change, myself coming in, it’s cool to see how everybody’s spirits are.

“There is nothing you can do better than just build off that.”

Chip Ganassi wants McMurray to continue with CGR in some capacity