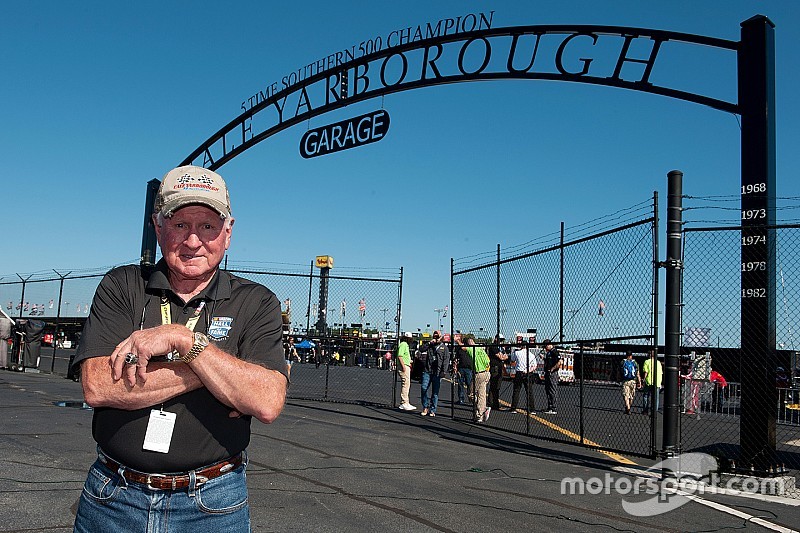 Cale Yarborough doesn’t have to sneak in the Darlington Raceway garage any more.

On Saturday, the track honored its local hero by dedicating the Cup garage in Yarborough’s honor.

Yarborough, who grew up in nearby Timmonsville, S.C., earned three NASCAR titles and 83 wins — including five Southern 500s at Darlington — over the course of his three-decade long career. But of all the venues Yarborough ever raced, Darlington remains his favorite.

“I slipped under the fence when I came to see my first race,” said Yarborough, who was hooked following the experience. “There’s no place like Darlington to me. To have the garage area named after you — for now — is just great.”

Yarborough believes Darlington’s Throwback Weekend is one of the best promotions he’s ever witnessed in the sport. He’s also enamored with Kevin Harvick’s paint scheme on the No. 4 Chevrolet which is reminiscent of Yarborough’s in 1979 and 1980.

Harvick, NASCAR’s 2014 champion, says “It’s an honor to drive a car that is iconic in our sport, and Cale Yarborough has been such a huge part of our sport.

“I grew up in an Earnhardt house, mainly because of my dad. But, I think when you look back, Cale, David Pearson, Richard Petty and Dale Earnhardt and a lot of these guys paved the way for where our sport is today with the battles they went through in their day and age.”

Although it’s been more than 30 years since Yarborough won his final race in 1982, the NASCAR Hall of Famer doesn’t believe the strategy has changed much at the 1.33-mile track.

“Not a whole lot,” Yarborough said. “This place will bite you. If you win a race here — everyone would love to win a race here at Darlington, I’ll tell you that. It’s a tough race.”

Yarborough’s most prized win at the Track too Tough to Tame was his first in 1968 when the track still measured 1.375-miles.

“My best memory is winning the ’68 Southern 500 — on the original Darlington racetrack,” Yarborough said. “Wouldn’t take nothing for that.”

Yarborough, 77, believes today’s drivers are different from racers he competed against. In his day there were no creature comforts in the cars such as cool suits and hydrations systems. But when it comes to rooting for a current driver who most closely reflects Yarborough’s style, the answer is simple — defending Sprint Cup champion Kyle Busch.

“He’s proned to trying to put a full-sized car through a half-sized hole,” Yarborough said. “I was kind of like that, too.”