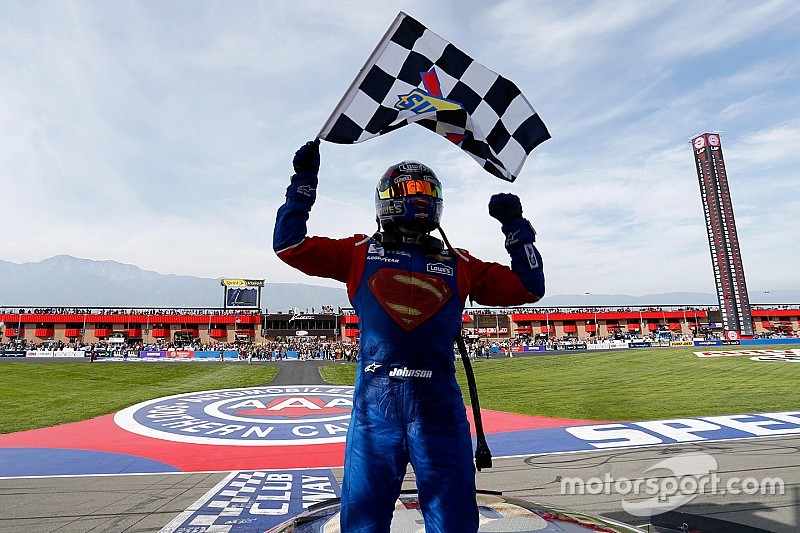 Johnson earned his 77th career Cup victory on Sunday at Auto Club Speedway in Fontana, Calif., which moved him into sole possession of seventh in all-time wins. Waltrip is tied with Bobby Allison for fourth on the all-time wins list with 84 victories.

What most impresses Waltrip is not so much Johnson’s collection of wins and championships but in the relatively short amount of time in which he’s collected them. Johnson’s first fulltime season in the Cup series was in 2002, when he was 26 years old.

“He hasn’t been in the sport all that long, so the amount of time it took him to break Dale Earnhardt’s record is remarkable. Johnson is a phenomenon like Jeff Gordon, his mentor,” Waltrip said.

“Seventy-seven wins and six championships is total dominance. What’s most impressive is the amount of time it took him to hit this mark – not so much the mark itself.”

Dale Earnhardt, with whom Johnson was tied in wins before Sunday, collected his 76th victory when he was 49 years old and his last championship when he was 43. Johnson just turned 40 last September.

Earnhardt and Richard Petty currently share the record of seven series championships – a goal Johnson and his crew chief, Chad Knaus, have made no secret about attempting to match or surpass.

“Every driver, Jeff Gordon included, who starts getting that far up in wins would like to win at least seven championships – even eight – and become the all-time record holder. If they deny it, they’re lying,” Waltrip said.

“For every driver in my era, the magic number was 100. I wanted 100 wins. Jeff (Gordon) wanted 100 and Jimmie probably feels the same way. With his good health and the top physical condition he’s in – heck, he can ride a bike from one end of the world to the other – coupled with a team that’s almost unbeatable, it’s certainly not outside the realm of possibility for Jimmie.”

Next up on the all-time wins list is Cale Yarborough, with 83. Could it happen this season?

“Maybe not this year, but definitely in the near future,” Waltrip said. “It’s hard to win six or eight races in one year, but anything is possible for Jimmie and the No. 48 team.

“They’ve got their act together and the car is good right now, so Jimmie could definitely end up passing me and Bobby (Allison) if things go right for him.”

Johnson crew chief: "We're not where we want to be" despite early wins