Dave Blaney and the Tommy Baldwin Racing (TBR) team will head to the Monster Mile this weekend for the FedEx 400 benefiting Autism Speaks. Blaney looks to drive the No. 36 Golden Corral Chevrolet to a solid finish in the NASCAR Sprint Cup Series (NSCS) event at Dover International Speedway. 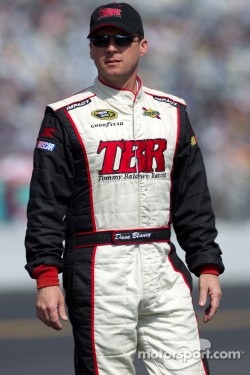 TBR AT DOVER – Blaney will make the TBR’s fifth start at the Monster Mile as the team looks to complete the race for the first time in its history. Mike Skinner posted TBR’s best starting position in the 2009 spring race; he started 34th.

BLANEY AT DOVER – Making his 20th start at the one-mile track, Blaney looks to complete his first race at Dover since 2008. The Buckeye Bullet posted his best finish of ninth in the 2008 spring race while teamed up with crew chief Tommy Baldwin at Bill Davis Racing. His average starting position is 29.8 and finishing position is 27.8.

CHASSIS NO. 93 – TBR will run the No. 93 chassis this weekend at Dover International Speedway for the first time this season. The Golden Corral team last ran chassis No. 93 at Darlington Raceway in 2010 when a practice incident damaged the car. The team completely rebuilt the chassis in the off-season.

LAST RACE RECAP: SHOWTIME SOUTHERN 500 – Locked into the race for the first time in team history, the No. 36 Golden Corral Chevrolet started from the 41st spot. Blaney quickly worked up to the 31st spot in the opening laps. The team battled the handling of the No. 36 Golden Corral Chevrolet for the majority of the day, and Blaney wheeled the car to a 24th-place finish.

IN THE POINTS – The 24th-place finish at Richmond moved the No. 36 Golden Corral team up another spot in the NSCS Owner Standings. The team is now 32nd and 16 points ahead of the 36th spot. Blaney also moved up to 31st in the NSCS Driver Standings.