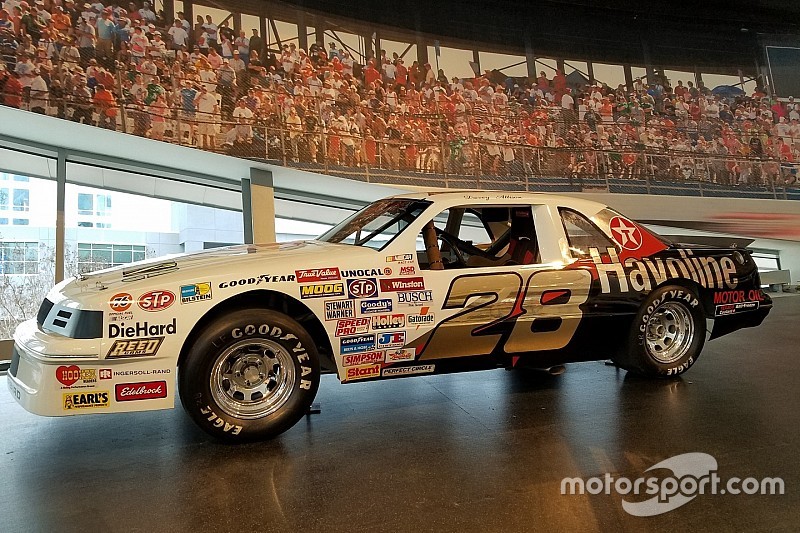 Familiar No. 28 Ford was the last addition to the updated collection on ‘Glory Road’

For the third time in its brief history, the NASCAR Hall of Fame completed its updated version of ‘Glory Road’ Friday with the unveiling of the No. 28 Ford Thunderbird driven by the late Davey Allison as part of the new ICONS display.

With today’s announcement there are now 18 new cars on display that will be open to the public early next week.

“We had crews working for the past four days installing the cars for the exhibit,” said NASCAR Hall of Fame Executive Director Winston Kelley. “Davey was such a great driver and even better person off the track and having his car from his first season is a nice addition to our exhibit.”

He drove for Rainier Racing during his rookie season setting what was then rookie records for wins with two and poles with five. He would later drive for Robert Yates, who served as engine builder on the car while at Rainier, and launched Robert Yates Racing.

NASCAR Hall of Fame member and Davey’s father Bobby Allison was joined by Davey’s son Robbie Allison, Joey Knuckles (Davey’s crew chief during the 1987 season), Larry McReynolds (serves as Davey’s crew chief from 1991-93). Lorin Ranier, son of then team owner Harry Ranier, also joined the group on stage and added that Davey was a great find for his dad’s team.

“We had put several drivers in the car and after Cale (Yarbrough) left the team in 1986 we were looking for someone to put in the car and it worked out that Davey got the ride and had a great rookie season,” Ranier said.

Robbie Allison said that looking at the car in the NHOF reminded him of something he saw on video and thinks about often to this day.

"When I look at this car, one thing that stands out is I always see the snippet online of him driving down pit road at Talladega and the whole crew is on top of the car,” he said. “I see it all the time."

For the elder Allison, who famously won the 1988 Daytona 500 with Davey finishing second, this was a proud moment for him.

“Davey wanted to be a racer from the time he was a youngster and he had to pursue his dream,” said Allison. “I told him he had to start from scratch and work his way up and he did and was very successful. I’m happy to see his car from his rookie year on display.”

Glory Road has served as one of the Hall’s most prominent displays since opening in 2010, featuring 18 historic race cars from the beginning of NASCAR through present day. Current and historic speedways from across the country are illustrated here as well, where guests can touch the texture of various tracks and feel the intense banking that drivers face week-to-week.

“Since the first Glory Road installation opened in the Hall in 2010, we've always strived to live up to the challenge to continue to show iconic cars from NASCAR's history," said Kelley. “I believe our exhibits team has again risen to that challenge with this third iteration – Glory Road: ICONS.”

As were the previous two Glory Road exhibits, the "ICONS" exhibit will be on display for the next three years.

The complete lineup of the new cars installed on Glory Road includes the following:

April Texas NASCAR races will get new tires, but no chance to test them

Circle Sport and TMG merge ahead of 2017 NASCAR season