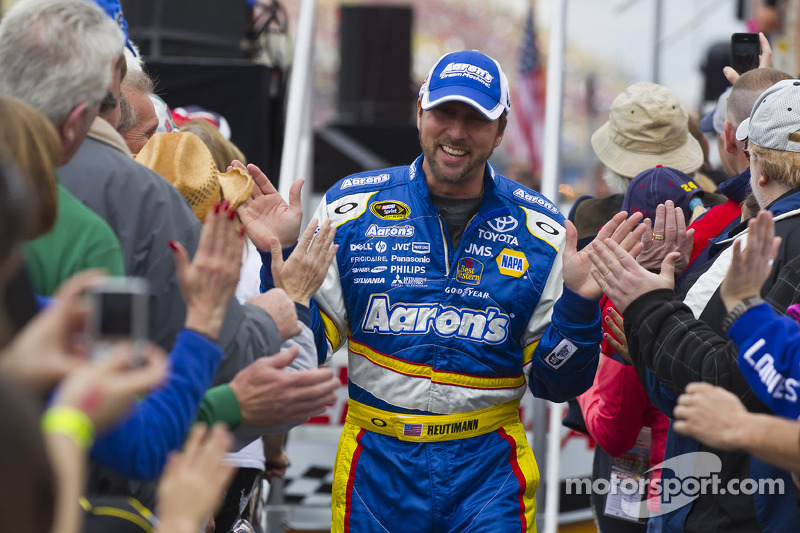 CORNELIUS, N.C. — No. 00 Aaron’s Dream Machine Toyota driver David Reutimann has reason for optimism as he heads to the 2.66-mile Talladega Superspeedway this weekend. Reutimann finished fourth last fall at Talladega - one of his six top-fives in 2010 and had a shot to win on the final lap. Reutimann scored one top-five, two top-15 finishes and led 19 laps last year at Talladega. Reutimann would love nothing more than to celebrate an Aaron’s 499 win in victory lane with the Aaron’s Dream Machine. Aaron’s sponsors both the Nationwide and the Sprint Cup races Saturday and Sunday as part of its Aaron’s Dream Weekend. 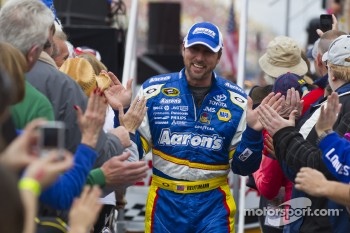 ON AARON’S DREAM WEEKEND: “Aaron’s always does cool stuff every race weekend. With Aaron’s as the sponsor of both the No. 00 Toyota and Aaron’s Dream Weekend in Talladega, they bring a lot of people in. A lot of their franchisees and vendors. Aaron’s has what they call ‘The Compound’ just outside the far end of the Nationwide garage where they have a motor coach set up. They always have a low country boil one night and a barbeque the next for all the MWR crew guys. They take really good care of all our guys and everyone they have out to the track. We always go over and hang out, eat some really good food and spend some time with Ken Butler (Aaron’s chief operating officer) and the Aaron’s folks.”

ANY ADDED PRESSURE WITH AARON’S AS THE RACE SPONSOR? DOES YOUR SCHEDULE GET BUSIER? “There is pressure to perform every week, but I think it kicks it up a level when your sponsor is also the race sponsor. I try my best to win every week, but it would be icing on the cake to do it with Aaron’s at Talladega. It’s a little bit busier than normal, but Aaron’s does a really good job of doing things at the racetrack. They do things at track where all the people are and get into the whole atmosphere.”

Our year is far from over and we are going to do everything we can to get on track.

ON THE RACING AT TALLADEGA AND WHAT TO EXPECT? “It’s hard to say. We saw a little bit of the two car packs last year at Talladega and a lot of it at Daytona this year. Talladega and Daytona are different tracks, even though they are far more similar now since the Daytona resurfacing. I think it’ll be interesting to see now that we’ve worked on communication and have more experience in the two-car packs. I can say it’ll be intense and it’ll be interesting.”

YOU’VE HAD A LITTLE BIT OF BAD LUCK TO START THE SEASON. WHAT ARE YOU DOING TO STAY POSITIVE? “A little bit of bad luck (laughs). That’s all we’ve had this year is bad luck! We haven’t had one good thing happen so far this year. That’s just the way it is. All you can do is keep at it. The one positive that we look at is that we’ve had really good racecars. We’ve been fast everywhere we’ve been. Everyone at MWR is doing a great job giving us fast cars. We just need to get things going in the right direction. This is just the way it goes. I don’t think anyone expected us to have the year that we’ve had so far with some of the things that have happened on the racetrack, but our year is far from over and we are going to do everything we can to get on track.”