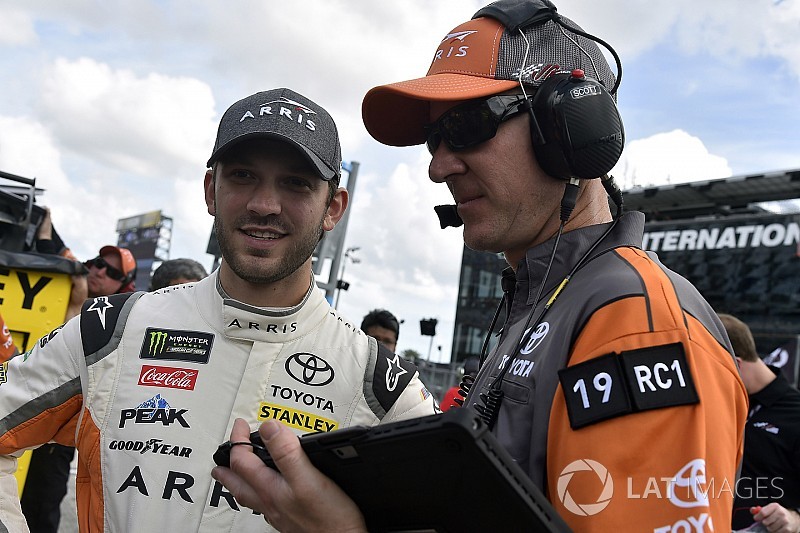 Daniel Suarez established the fastest lap in Speedweeks practice with a speed of 203.179mph.

The drafting started immediately in the fourth practice session with 24 cars in the pack. Kyle Busch initially posted the top speed of 202.689mph with nine Fords in tow. Just after the 10-minute mark, Suarez posted the fastest lap of 203.179mph, Newman, McDowell, Allmendinger, Kyle Busch, Menard, Truex Jr., Kahne, Keselowski and Harvick rounded out the top 10.

William Byron led a draft of his four Hendrick Motorsports teammates—Jimmie Johnson, Chase Elliott and Alex Bowman—along with Kyle Larson 15 minutes into practice. Larson had the fastest speed (199.530mph) of the five Chevrolets but his time was just 19th quick. After completing 24 laps, Larson, Byron, Bowman and Elliott retreated to the garage.

“I definitely like that,” Byron said after completing the exercise.

Thirty minutes into the session, the only action was limited to single-lap runs. Keselowski, Blaney and Jamie McMurray ran laps.

Kasey Kahne, Bowman, Truex and Suarez waited on pit road for Johnson to return to the track for another draft. With 10 minutes to go, crew chief Chad Knaus released the No. 48 from the garage. The five cars worked on swapping the lead. Truex pulled off after six laps while the four remaining drivers continued. The pack passed Danica Patrick but she struggled to suck up to the back of the draft. After finally running in the group, she reported that her car was directionally better but the brakes pulled unevenly at times.

Johnson’s 42 laps were the most completed during the session.

Only 29 of 40 drivers participated in the 50-minute session.