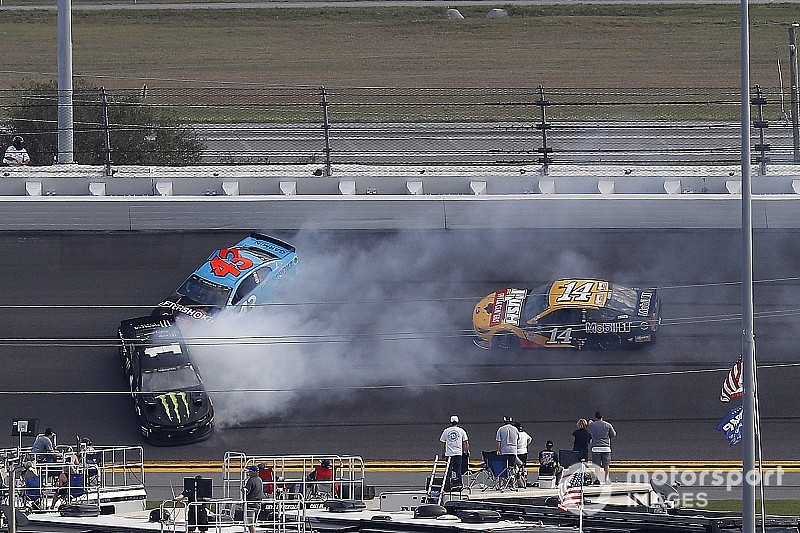 Busch had to make several blocks on the final of the 60 laps to remain out front but was able to pick up his first stage win of the 2019 season.

William Byron, the pole-winner, led the first two laps, until Ricky Stenhouse Jr. – using the bottom line – moved out to the front.

On Lap 6, Matt DiBenedetto got around Stenhouse to take the lead with some help from Martin Truex Jr.

On Lap 15, all of Ford cars elected to pit together, with all taking gas-only in order to make it to the end of the stage.

Five more cars pit on Lap 17 as DiDenedetto continued to lead the way up front.

On Lap 19, Corey LaJoie lost a right-front tire which brought out a caution just as seven cars were heading down pit road. Five of them continued to drive through the pits without making a stop.

The remaining cars who had not yet pit elected to under the caution, which turned the race lead over to Stenhouse on the restart on Lap 25.

With 30 laps to go in the stage, Stenhouse remained out front, followed by Harvick, Almirola and four other Fords.

Kyle Busch moved in the lead, running the bottom line, on Lap 35 with Hamlin in tow behind him.

With 20 laps remaining, Kyle Busch continued to lead the way followed by Hamlin and Bowman, who moved up to third.

On Lap 50, Kurt Busch spun on his own in an incident that also collected Darrell Wallace Jr., Jamie McMurray and Tyler Reddick.

Several of the lead-lap cars elected to pit under the caution with Tifft the first off pit road. On the restart on Lap 54, Kyle Busch remained out front followed by Hamlin and Bowman.

With five laps left in the stage, Kyle Busch and Hamlin continued to pace the field.

Before the start of the race, the cars of Kyle Larson and Casey Mears had to start from the rear due to transmission changes and McMurray had to move to the back due to a gear change.