CONCORD, N.C. (Nov. 12, 2013) – Daytona 500 winner and Roush Fenway Racing (RFR) driver Trevor Bayne has announced today that he has been diagnosed with multiple sclerosis. Bayne - 22 years old - has undergone extensive testing at the Mayo Clinic and has been cleared by doctors and NASCAR to compete behind the wheel. 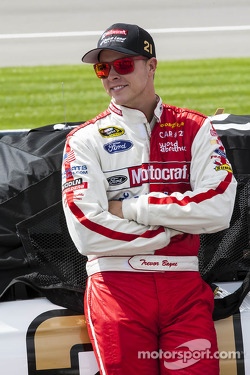 “I’ve never been more driven to compete,” said Bayne. “My goals are the same as they’ve been since I started racing. I want to compete at the highest level and I want to win races and championships. I am in the best shape I’ve ever been in and I feel good,” added Bayne. “There are currently no symptoms and I’m committed to continuing to take the best care of my body as possible. I will continue to trust in God daily and know that His plan for me is what is best.

“As for now, I want to close out the season strong this weekend at Homestead and then shift my focus on getting ready to compete for the NASCAR Nationwide Series (NNS) Championship in 2014. I have a great team, a great family and great people all around me. I have been truly blessed in life and I look forward to what my future holds.”

In 2011, Bayne became the youngest driver in NASCAR history to win the famed Daytona 500. He is currently sixth in the NNS standings, having accumulated one win, six top-five and 20 top-10 finishes in 2013. He will compete again full-time for the NNS championship in 2014, driving the No. 6 AdvoCare Ford Mustang.

“We are 100 percent supportive of Trevor and his ability to compete in a race car,” said Roush Fenway team owner Jack Roush. “I have full confidence in Trevor and his partners have all expressed that same confidence and support. As with all of our drivers, we look forward to standing behind Trevor and providing him with all of the tools he needs as he continues to develop in his young career.”

Cautious optimism riding along with Johnson in season's final week