Menard blames Johnson for huge wreck: “Jimmie does that a lot”

Paul Menard has criticized Jimmie Johnson’s restrictor plate driving tactics on superspeedways after being taken out of the lead of Sunday’s Clash at Daytona, which Johnson went on to win.

Menard had led the majority of the race from pole position in his Wood Brothers-run Ford Mustang, but with rain threatening to end the race early, Johnson made his move on the backstretch on Lap 57.

Their collision triggered a huge pile-up that involved most of the field. Heavy rain then fell during the ensuing yellow, and the race was called soon after.

“Jimmie pulled down, I moved down a little bit, and the next thing I knew I’m getting turned in the left rear,” said Menard, who also pointed out that Johnson took him out in the July race at Daytona last year. “Jimmie does that a lot at these tracks, it’s unfortunate.

“We just got turned there. I didn’t really know what happened until I saw a replay. I felt like it was aggressive side-drafting. I got turned to the inside and hooked to the right and all hell broke loose.”

“It was a pretty tame race up until that point. We knew that last restart was basically a new race – a little dash for cash to the end. It was definitely expected.

“I’m surprised we actually got single-file up top again after that last restart, but I knew something like that was gonna happen. It was just a matter of time.”

Another Ford driver, Team Penske's Joey Logano, managed to weave his way through the chaos to finish third, and said: “From my view, it’s just cars crashing and trying to avoid it, but it just looked like [Johnson] was trying to side draft Paul. I’m sure it’s not intentional, but he definitely dumped him.” 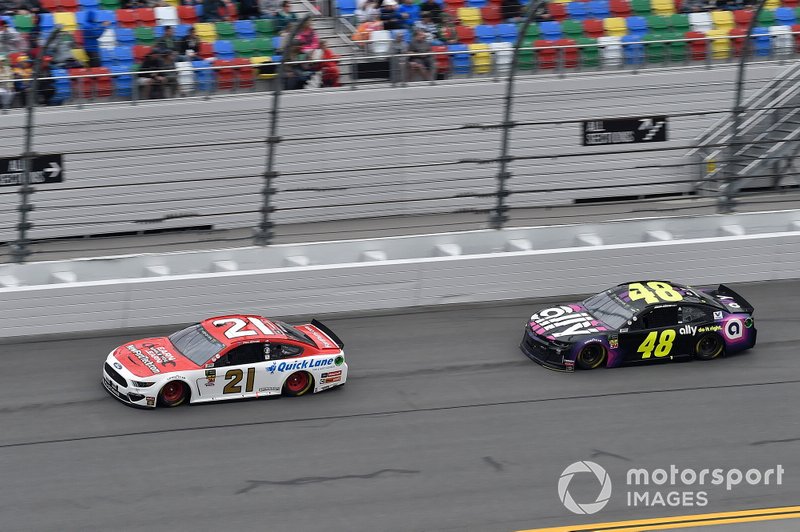