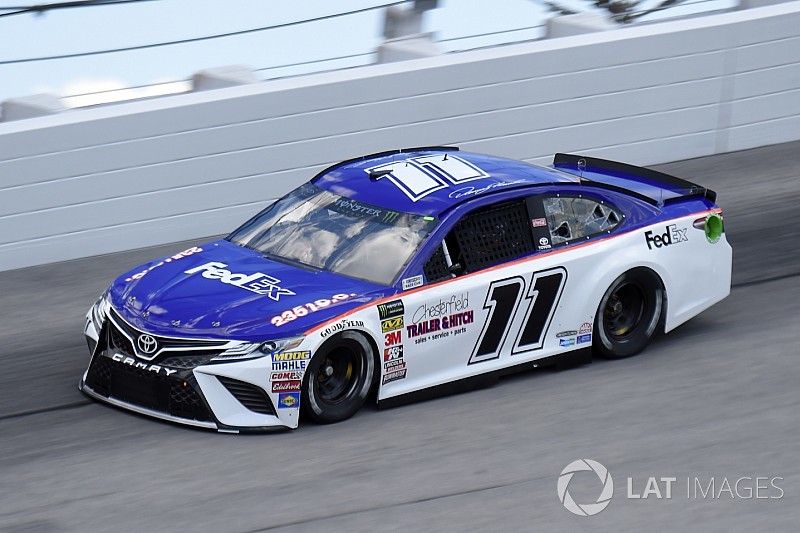 Denny Hamlin will try for two-in-a-row in the Southern 500 from the pole.

The pole is his third in the Monster Energy NASCAR Cup Series this season and 29th of his career.

“The number one pit stall is obviously very important here. I’m excited about that," Hamlin said. "Really, the team has done a great job with the car all weekend.

"So, I'm pretty optimistic and you know hopeful that we have a good smooth race on Sunday and continue to build some momentum here over the next few weeks.”

Hendrick Motorsports had three of its four drivers advance to the final round of qualifying.

Bowman bolted to the top of the second round with an average lap speed of 174.624 mph.

Among those who failed to advance were Brad Keselowski, Jimmie Johnson, Kevin Harvick, Matt Kenseth and Clint Bowyer.

“At the end of the day we weren’t far off but not good enough to advance,” Keselowski said.

Johnson said he tagged the wall off Turn 4 during his final qualifying attempt at the conclusion of the 10-minute session.

“I thought I had plenty of space, but I didn’t, clearly and it damaged the right side of the car,” Johnsons said.

Larson led the way in the first round by he was followed by an army of Team Hendrick drivers.

Elliott was fourth and Johnson completed the top-five as all four HMS drivers ended up in the top-five.

Rounding out the Top 10 were Kurt Busch, Hamlin, Newman, Ryan Blaney and Logano.

With just over six minutes remaining in the first round, Jeffrey Earnhardt spun off Turn 2, slid down the backstretch and hit the inside retaining wall with his No. 96 Toyota. He appeared to suffer significant damage.

Earnhardt’s team immediately began bringing out its backup car, which means Earnhardt will have to start Sunday night’s race from the rear of the field.

Among those who failed to advance to Round 2 were Ricky Stenhouse Jr., Darrell Wallace Jr., Kasey Kahne and Jamie McMurray, who has had to change engines twice this weekend and will already start the race from the rest of the field.

“I think the car’s a little faster than what we ran the first lap.” Stenhouse said. “I really love this race track. I’ve made some mistakes early in the race before so that’s what I’ll focus on tomorrow, being around at the end.”

Said Kahne over his team radio following his qualifying run, “That’s all I got right there, I’m on the verge right there. I don’t know how to go any (expletive) faster.”