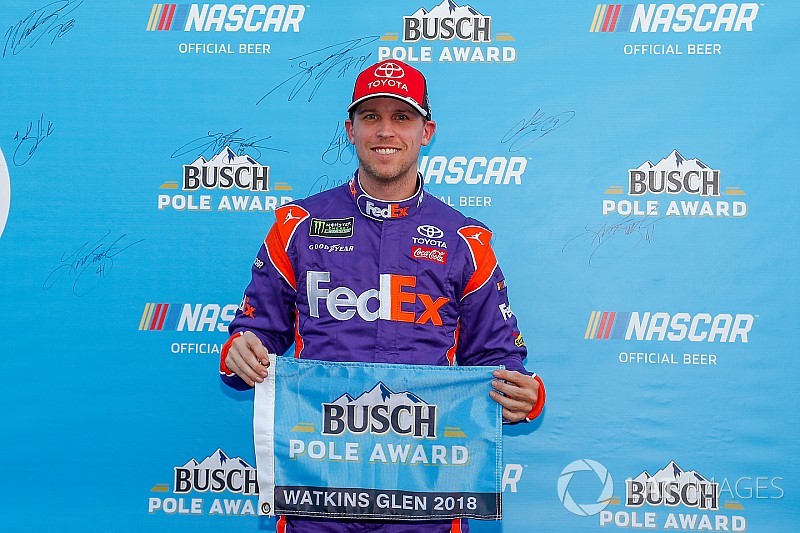 The pole-deciding round of qualifying lasted ten minutes and Kyle Busch was the first driver to put up a time, pacing WGI at 125.427mph.

Chase Elliott appeared to have the pace to best Busch, but after getting extremely wide out of the final corner, he fell 0.003 seconds short. It was Busch’s teammate Denny Hamlin who knocked him off the number one spot with a 125.534mph lap.

No one was able to match him with the Joe Gibbs Racing cars in the closing minutes with Hamlin and Busch on the provisional front row.

"Yeah, he's usually pretty good at this stuff," said Hamlin of beating Busch. "I knew once the 18 and 9 had went and I went behind them and they said I was P1, I thought we had a real shot at it.

It's amazing to me how well Kyle hits his marks and does not make mistakes, especially on a one-lap qualifying get it done moment. While I feel I make quite a few more mistakes and take repetitions to really maximize the speed out of my car, he does it right away."

A frustrated Elliott had to settle for third, and he was well aware of what could have been.

“Very  frustrating. I hate that. Feel like I had a real opportunity to grab pole today,” he said.

Michael McDowell went to the top of the charts early in the first round of qualifying, but with 14 minutes remaining, Elliott surged to the top if the board at 125.126mph. He remained there for the remainder of the session.

But the real battle was around the bubble.

In the closing seconds, the final transfer position changed hands often and rapidly. Ultimately, it came down to Jimmie Johnson and Truex.

Johnson bumped Truex with under a minute to go, but Truex was able to respond and he knocked Johnson back out. The margin between them: 0.008 seconds.

“There’s a lot of places you can give it up or make up time when things are going your way,” said the seven-time series champion. “Our car is very comfortable to drive … we will race well.”

Notably, Kevin Harvick was forced to abort his lap after wheel-hopping down into Turn 1, forced to settle for 16th on the time sheets. In fact, three of the four Stewart-Haas Racing drivers failed to advance with Clint Bowyer 19th and Kurt Busch 21st.