Denny Hamlin: 'I don't know why people question who I am'

Hamlin is often in the public eye, more so than most other drivers, and believes his high profile makes him a target for criticism.

MARTINSVILLE, Va.— Cleared to race after a shard of metal and rust residue were removed from his eye, Denny Hamlin fielded questions Friday from reporters in the media center at Martinsville Speedway.

Before he left the dais, Hamlin forcefully defended his record and his reputation against innuendos suggesting he might have had an ulterior motive in sitting out last week’s NASCAR Sprint Cup Series race in Fontana, Calif.

“People who think negatively of me or think that we side-stepped some sort of drug test or something, it’s ridiculous,” Hamlin said emphatically, after describing in detail the procedures under which the sliver of metal was diagnosed and removed. “I’m in one of the top three cars in NASCAR. I would have to be an absolute moron —moron! — to risk that. I have a daughter I have to provide for [for] a really long time. For people to question who I am inside and outside the race car ... I’ve never done anything to even put that in question.” 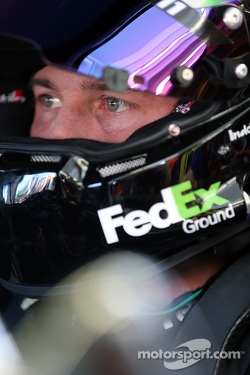 NASCAR doctors held Hamlin out of last Sunday’s race after the driver complained of impaired vision, the result of what was originally thought to be a sinus infection. Hamlin was taken to a nearby California hospital, where he said a specialist discovered the tiny sliver of metal in his eye.

Hamlin is often in the public eye, more so than most other drivers, and believes his high profile makes him a target for criticism.

“I got a wake-up call, because I don’t drink at all, hardly ever. I’ve never done drugs — ever. I’m as clean as they come. I don’t know why people question who I am outside the race track.”

Hamlin appeared in fine fettle on Friday. He posted the fastest speed (101.021 mph) in opening NASCAR Sprint Cup practice in preparation for Sunday’s STP 500, the sixth race of the season in NASCAR’s premier series.

Why F1 was split over Bahrain’s vaccination offer