Denny Hamlin insisted his 2019 championship hopes were not done and he was right. 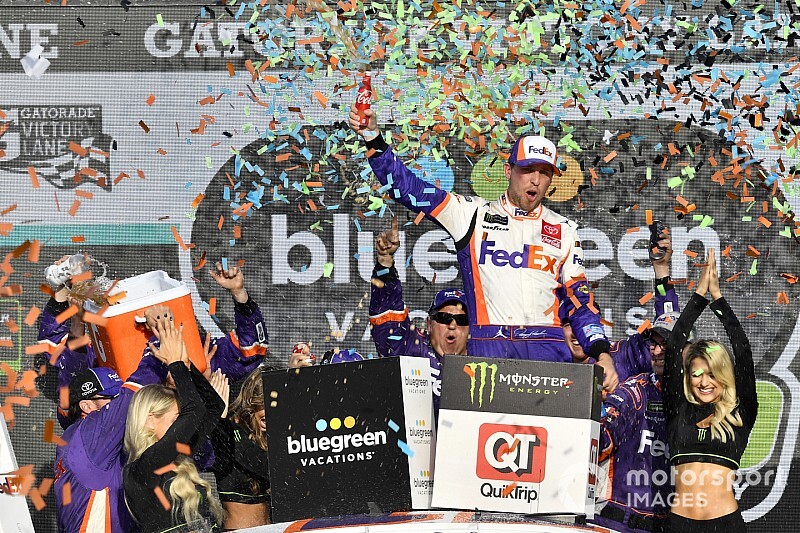 After dominating much of Sunday’s Bluegreen Vacations 500 at ISM Raceway at Phoenix, Denny Hamlin survived a 3-lap shootout to pick up his sixth NASCAR Cup Series win of the season.

On the final restart on Lap 310 of 312, Hamlin led the way after taking only two new tires but got off to a good restart as Kyle Busch tried feverishly to hold off a wild charge from Ryan Blaney.

Busch finally came away with the second position and Hamlin ended up winning by .377 seconds at the checkered flag.

The victory – the 37th of Hamlin’s career – ensures he will be one of the four drivers to compete for the 2019 series championship next weekend at Homestead, Fla., joining Kyle Busch, Kevin Harvick and Martin Truex Jr.

He entered Sunday’s race fifth in the playoff standings, 20 points behind Joey Logano, and in danger of missing out on a title shot.

"I can't believe it," Hamlin said. "This race team worked so hard this whole year.  They deserve to be there. I put them in a bad hole last week. I told them today in the meeting, I said, 'I'm going to give everything I've got to make up for the mistake I made last week' - and that's all I got.

"I've been through so many playoffs, so many things that go wrong. This year I'm waiting for the right next thing to go happen. I can't thank this team enough. I don't have words yet. I'm going to have to do a little bit more donuts. I'm not done yet, then go to Homestead."

Hamlin said his No. 11 Toyota was one of the "best cars of my career."

"I pushed for all I had. I mean, that's all I got. Once we got the big lead there, a little over 10 seconds, I just kind of sat there. I got to thinking about if the caution does come out, I want to lap as many as I can.

"That's all we had. There's still work to be done. Doesn't guarantee a championship. Gives us a chance. Live to fight another day. That's all you can ask for."

Following the break between Stages 2 and 3, Logano continued to lead on the restart on Lap 160 with Chase Elliott right behind him.

On Lap 163, Hamlin powered around Elliott to take the second spot as Elliott dropped to third.

Elliott appeared to cut a left-rear tire on Lap 166, spun through Turn 1 and wrecked to end any chance he had at qualifying for the Championship 4 at Homestead next weekend.

Most of the lead-lap cars elected to remain on the track and Logano led the way on the restart on Lap 174. He was followed by Hamlin, Blaney, Kyle Busch and Harvick.

Hamlin got around Logano in Turn 2 on Lap 177 to retake the lead as Logano dropped to second with Kyle Busch running third.

After working him for several laps, Kyle Busch finally got around Logano to take the second position on Lap 187.

Blaney took over the third position from Logano on Lap 204 as Hamlin maintained a more than 3-second lead over Kyle Busch.

With 100 laps remaining, Hamlin’s lead over Kyle Busch had expanded to more than 5 seconds. Blaney ran third, 8 seconds behind the leader.

On Lap 230, Kyle Busch reported a possible vibration in his No. 18 Toyota but remained on the track.

On Lap 80, Ryan Newman became the first driver to make his final green-flag pit stop to take enough fuel to make it to the finish. Newman, however, was penalized for speeding on pit road and had to make a pass-through penalty.

With 74 laps remaining, Logano went a lap down to leader Hamlin, leaving 10 cars on the lead lap.

Once the cycle of green-flag stops was completed on Lap 251, Hamlin remained in the lead with an 8-second advantage over Kyle Busch.

On Lap 303, John Hunter Nemechek slammed the wall in Turn 1 to bring out a caution that set up a wild finish and bunched the field.

All of the seven lead-lap cars elected to pit, with Hamlin the first off pit road after taking two new tires. On the restart on Lap 310, Hamlin was followed by Blaney (also two tires), Kyle Busch (four tires) and Truex (four tires).

Logano eliminated: "Just wasn’t our year to make it, I guess"