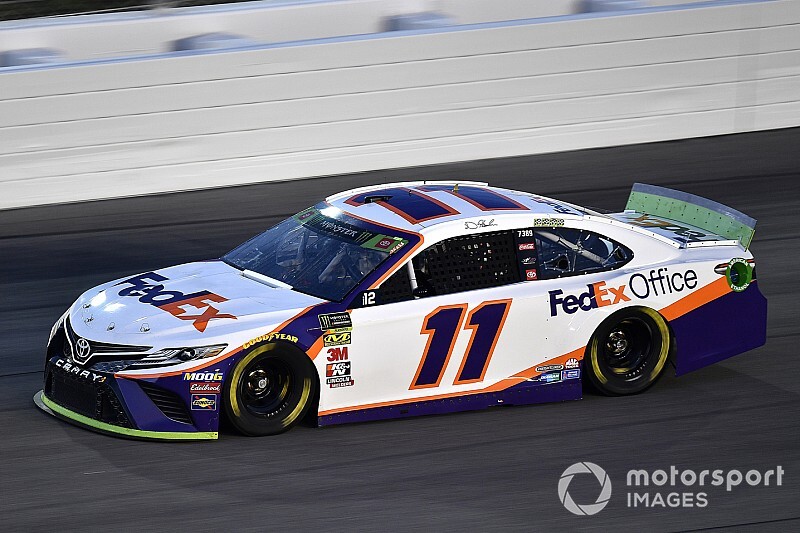 Denny Hamlin grabbed the lead after a duel with Martin Truex Jr. and held on for the Stage 2 victory at Kansas Speedway.

Hamlin and his Joe Gibbs Racing teammate traded the lead twice late in the stage before Hamlin went on to hold off Ryan Blaney for the stage victory.

Following the break between Stages 1 and 2, most of the lead-lap cars remained on the track with Elliott among those who stayed out and took over the lead.

On the restart on Lap 87, Elliott was followed by Suarez, Truex, Brad Keselowski and Hamlin.

Suarez quickly powered to the lead shortly after the restart as Truex moved up to second.

Truex was able to get around Suarez on the inside off Turn 4 on Lap 19 to grab the lead for the first time in the race.

With 60 laps remaining in the second stage, Truex maintained about a half-second lead over Suarez while Elliott ran third. Hamlin was fourth and Erik Jones fifth.

On Lap 105, Elliott passed Suarez to move into the second position.

Joey Gase spun off Turn 4 on Lap 115 after contact from Larson to bring out a caution. All of the lead-lap cars elected to pit with Truex the first off pit road.

On the restart on Lap 121, Truex led the way followed by Elliott, Hamlin, Jones and Suarez.

Hamlin went to the inside of Truex on the restart only to see the two drivers swap the lead again before Hamlin established a solid advantage on Lap 127.

With 20 laps to go in Stage 2, Hamlin held about a 1.7-second lead over Blaney while Truex ran third.

Hamlin’s lead over Blaney remained at about 1.5 seconds after 75 of the 80 laps in the stage.