Denny Hamlin: Winning is "the only thing that I care about" right now 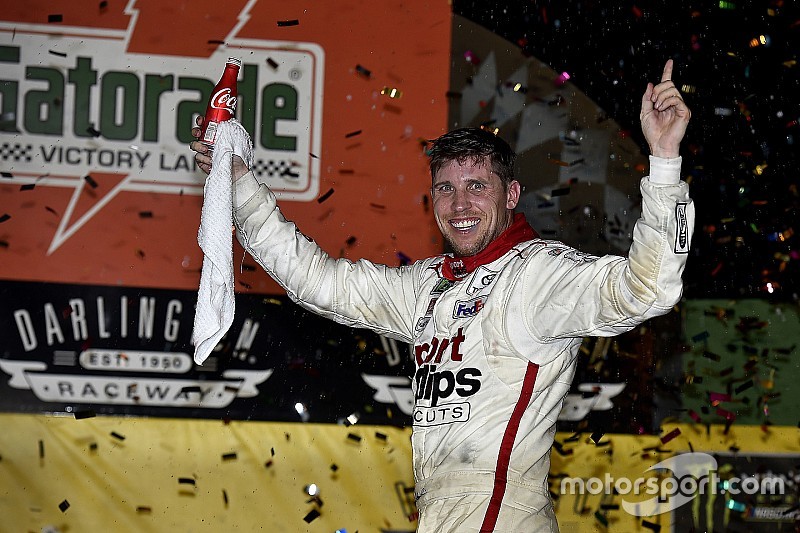 With a spot in the Monster Energy NASCAR Cup Series playoffs virtually secured by his position in the series standings, Denny Hamlin is focused on one objective – to win.

A win of course would lock Hamlin into the playoffs and give him some valuable playoff points but it would also extend his streak of 12 consecutive seasons in the Cup series with at least one victory.

The streak is important to Hamlin, but winning will give him the best opportunity to continue to compete this season for his first series championship.

“We care about winning and that’s the only thing that I care about. Running better is very, very important to us at this point, so we’re doing everything we can to work hard and get to that level that we want to be at,” Hamlin said Friday at Darlington (S.C.) Raceway.

“Winning one of these next two would for sure help with the momentum going into the playoffs, but momentum is only as good as that weekend. Just because you win this week, on Monday it does nothing for you for next week.

“Sometimes momentum is overstated. It’s just about how you’re performing on any given week.”

Hamlin's weekend at Darlington has gotten off to a strong start, as he led the way in the opening practice session.

While Kyle Busch has battled head-to-head with Kevin Harvick and Martin Truex Jr. virtually every this season for wins, Hamlin – Busch’s teammate at Joe Gibbs Racing – has had what he describes as “an average season.”

He’s finished a season’s-best third three times this season, the most recent time at Charlotte in May. Since then, though, Hamlin has just four top-10 finishes in 11 starts.

He hopes Sunday night’s Southern 500 at Darlington – a race he won for the first time last season – can kick-start a strong playoff run.

“I think that there’s only a handful of drivers that have won over 10 years straight. It’s important (to me),” Hamlin said of his winning streak. “I still believe that we will win a race before the season is over, if not multiple.

“It’s got to start this weekend. The countdown is on. In 2013 we waited until the last race of the year to win. A little bit of an asterisk (there) because I was hurt most of that year, but still it’s a streak for certain that is important to me.”