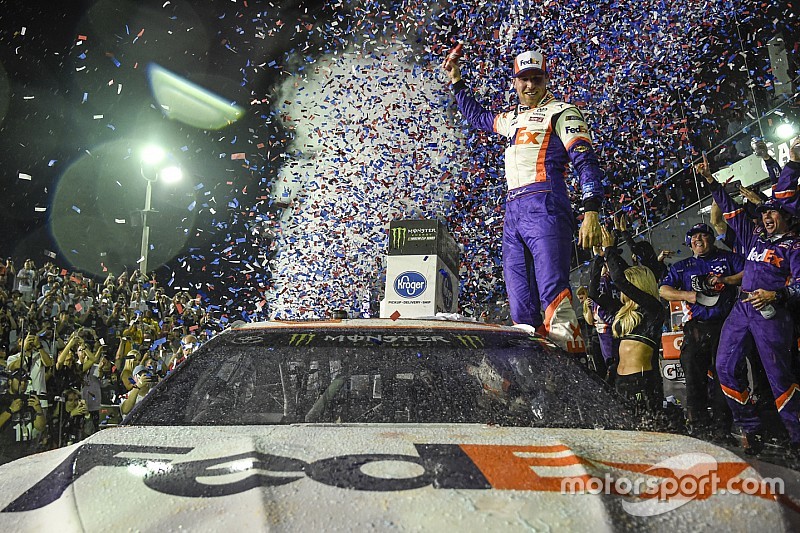 Joe Gibbs said his late son, J.D., “lives on in us” and Sunday Denny Hamlin took him to Victory Lane in the Daytona 500.

In overtime, Hamlin – with J.D. Gibbs’ name on Hamlin’s No. 11 Toyota - feverishly held off his Joe Gibbs Racing teammate, Kyle Busch, in overtime to win the 61st running of the Daytona 500.

The win is Hamlin’s second in the 500 but also ends his 47-race winless streak in the Monster Energy NASCAR Cup Series dating back to September 2017.

“The whole family, they’ve just done so much for me throughout the course of my career. This one’s for J.D.,” Hamlin said. “We’re desperately going to miss him the rest of our lives but his legacy still lives on at Joe Gibbs Racing.

J.D. Gibbs, the eldest son of Joe Gibbs, died Jan. 11 due to complications following a long battle with a degenerative neurological disease.

A memorial service, attended by more than 3,000 people and live-streamed on NASCAR.com, was held on Jan. 25 at Davidson (N.C.) College.

The race was also the first for Hamlin with his new crew chief, Chris Gabehart.

“He’s a short-track racer, that’s what I love about him” Hamlin said of his new crew chief. “That short track mentality. It’s amazing to be in this position. I don’t want to tear this one up because I want to be able to put it back in my house.”

Hamlin with this 500 victory, he hopes just to enjoy it more.

“I think I was so dumbfounded with everything the first time, with photo finish and everything,” he said. “This one will let me soak it in a little more. I’m going to have a terrible hangover tomorrow but I’m going to enjoy it the rest of my life.”

Later, team owner Joe Gibbs said of the finish: "This is the most emotional and biggest win I've ever had in my life in anything."

The win is the 32nd of Hamlin’s career and he all-but ensures a spot in the 2019 NASCAR playoffs.

Following the break between Stages 2 and 3, William Byron remained on the track and inherited the lead when the final stage went green on Lap 126.

Ryan Newman was penalized for an uncontrolled tire and had to restart from the rear of the field.

On the restart lap, Byron got around Ryan Blaney to take the lead as Almirola moved into second.

With 50 laps to go in the race, Byron remained in the lead, consistently blocking advances from Johnson and Ricky Stenhouse Jr. Clint Bowyer was in fourth with Kevin Harvick in fifth.

Three cars elected to make their pit stop on Lap 156 and Austin Dillon and Brendan Gaughan made contact on pit road.

Under the caution, most of the lead-lap cars elected but McMurray stayed out and inherited the lead followed by Kyle Busch, Hamlin, Alex Bowman and Matt DiBenedetto.

Newman and Martin Truex Jr. were both penalized for speeding on pit road and had to restart from the rear of the field. Johnson was penalized for improper fueling and held for two laps on pit road.

With 30 laps to go, Hamlin moved out front followed by Bowman and Kyle Busch.

Caution was displayed on Lap 174 for debris on the track, which bunched the field back up again. The race returned to green on Lap 178 with Hamlin in the lead followed by Kyle Busch, Jones, Byron and Bowman.

On Lap 180, Jones was forced to pit under green with what he believed to be a fueling issue.

Larson spun off Turn 3 on Lap 181 with an apparent flat tire to bring out another caution. The race returned to green-flag conditions on Lap 185 with Hamlin still in the lead.

With 15 laps to go in the race, Hamlin held the lead followed by Kyle Busch and Bowyer.

Coming off Turn 4 on Lap 187, Brad Keselowski spun with what appeared to be a flat left-rear tire to bring out the ninth caution of the race. The race returned to green with 10 laps remaining and Hamlin still out front.

Menard got into DiBenedetto in Turn 3 on Lap 191 to trigger a multi-car wreck that collected 21 cars, including several top contenders such as Byron, Blaney, Aric Almirola, Daniel Suarez, Truex, Austin Dillon, Johnson, Stenhouse and Jones.

“I will take the blame for that one, I guess,” Menard said. “We had really fast Fords. I sped on pit road and got us behind. We had to play catch-up. We had a shot there at the end though.”

The race was halted for nearly 25 minutes as NASCAR had to clean the track of debris.

When the race returned to green on Lap 195, Kyle Busch held the top spot followed by Hamlin, Bowyer, McDowell and Logano.

On the restart, Stenhouse and Larson made contact entering Turn 3 which triggered another multi-car accident and brought out another caution.

The race returned to green with two laps to go with Kyle Busch still out front, followed by Hamlin, McDowell and Logano.

Bowyer turned in front of McDowell in Turn 3 on the restart to start another accident and sent the race into overtime. Also collected in the incident were Chase Elliott, Keselowski, Byron, Landon Cassill and Jamie McMurray.

Hamlin emerged as the leader from the melee and led the way into overtime followed by Kyle Busch, Logano, McDowell and Preece.

Ryan Preece both happy and frustrated with "intense" 500 debut