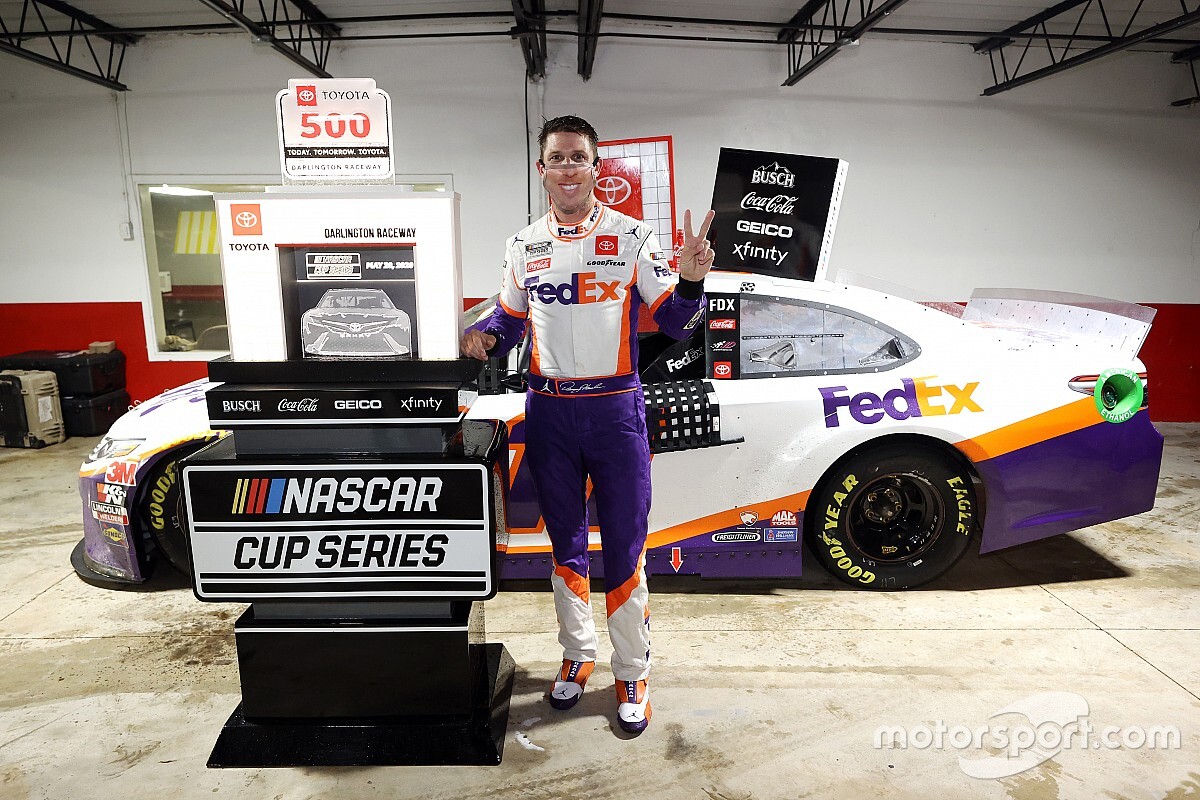 Denny Hamlin escaped with his second NASCAR Cup Series victory of the season as rain brought a halt to a wild battle in the closing laps at Darlington.

Late in the race, Hamlin – on older tires – was fending off a stiff challenge from Chase Elliott and Kyle Busch when Busch wrecked Elliott on the frontstretch on Lap 201 of 228 laps, bringing out a caution.

While under caution, rain – which had threatened for about half an hour – suddenly picked up and NASCAR called the race with 20 laps remaining, giving Hamlin the win in the Toyota 500k at Darlington (S.C.) Raceway.

The win by Hamlin is his second of the season – he also won the season-opening Daytona 500 – and 39th of his career.

Hamlin becomes the winner of the first Wednesday night Cup race since 1984. NASCAR has run a pair of races at Darlington over the last four days after it put its season on hiatus in mid-March due to the COVID-19 pandemic.

“This is a driver’s race track. You can move around, you can do different things to make your car handle. We got it right today," Hamlin said.

"The weather really didn’t play a factor in our (late pit) call there. It was really, we were limited on tires. We had just come to take tires, which was our last set, but we had a set of one-lap scuffs. They weren’t glued up in time. We didn’t have time to glue them. The only choice for us was to stay out. We were really the best car on that long run anyway. I think the right car won.”

The Xfinity Series will compete at Darlington at noon ET Thursday (Fox Sports 1), a race that was postponed from Tuesday night, also due to persistent heavy rain. The next Cup Series event is the Coca-Cola 600 on Sunday at Charlotte Motor Speedway.

Following the break between Stages 2 and 3, all lead-lap cars pit with Harvick the first car off pit road. On the restart on Lap 133, Ryan Newman led the way as he and Chris Buescher did not pit. Harvick restarted in third.

Jones powered to the lead using three-wide move with 95 laps to go as Newman dropped to second and Elliott moved to third.

With 75 laps remaining, Jones had opened a more than 1-second lead over Elliott. Harvick continued to run third, 2 seconds behind the leader.

Elliott got around Jones on the outside with 68 laps to go to take the lead for the first time in the race.

Four laps later, Hamlin had moved into third behind Jones. Clint Bowyer ran fourth and Kyle Busch had cracked the top-five. With 62 laps to go, Hamlin moved into second.

With 53 laps to go, several teams began making their final green-flag pit stops of the race. Elliott was among the first group who dropped to pit road.

Matt Kenseth, who had already made his stop, spun off Turn 2 with 49 laps to go to bring out a caution and disrupt the green-flag stops. Keselowski, among those who had not pit, was the leader at the time.

During the caution, Keselowski and Brennan Poole pit, turning the lead back over to Elliott. On the restart on Lap 187, Elliott led the way followed by Keselowski, Hamlin, Poole and Bowyer.

On Lap 194, Bowyer hit the wall in Turn 4 wall and spun down toward the entrance to pit road which brought out a caution.

Hamline and DiBenedetto elected to remain on the track while the rest of the lead-lap cars pit, with Harvick the first off pit road. Hamlin led the way on the restart on Lap 200 followed by DiBenedetto, Harvick, Kyle Busch and Jones.

On the start of Lap 201, Kyle Busch got into Elliott, sending him plowing into the frontstretch wall. After getting out of his car, Elliott waited until Busch came back around and directed an obscene gesture toward Busch’s No. 18 Toyota.

While the race remained under caution, rain began falling at Darlington, threatening to bring the race to a premature conclusion.

Bowyer got off pit road with the lead on a late caution and held off Elliott to win his second consecutive stage.

Following the break between Stages 1 and 2, all the lead-lap cars pit with Bowyer the first off pit road. On the restart on Lap 69, Bowyer was followed by Ryan Blaney and Truex.

Chris Buescher spun and wrecked on Lap 72 after contact from Michael McDowell to bring out the caution. A handful of drivers elected to pit but Bowyer led the way on the restart on Lap 77.

With 45 laps to go in the stage, Bowyer was fighting off a challenge from Truex for the lead while Bowman ran third.

On Lap 78, Ricky Stenhouse Jr. got into the wall off Turn 2 which brought out a caution and most of the drivers who did not pit under the previous caution, did so on this one.

Truex was among those who stayed out and inherited the lead when the race restarted on Lap 87. He was followed by Harvick and William Byron.

Blaney tagged the wall on Lap 92 and was forced to pit road for repairs but the race remained under green-flag conditions.

With 30 laps to go in the stage, Truex maintained a small but steady lead over Harvick with Bowyer having moved back up to third on fresher tires.

On Lap 99, Harvick went to the inside of Truex and came away with the lead for the first time in the race.

Cole Custer got into the wall in Turn 2 to on Lap 108 to trigger a caution.

All of the lead-lap cars elected to pit with Bowyer the first off pit road. On the restart on Lap 113, Bowyer led the way followed by Truex and Harvick as rain began closing in on the track again.

With 10 laps remaining in the stage, Bowyer was fighting off a challenge from Elliott for the lead with Truex running third.

Bowyer took command early and easily held off Truex to take the Stage 1 victory – his first stage win of the 2020 season.

Ryan Preece, who started on the pole thanks to starting procedures that included an invert, was passed by Ty Dillon for the lead at the conclusion of the first lap.

On Lap 2 in Turn 3, John Hunter Nemechek got turned around and hit the wall to bring out the first caution. Ty Dillon continued to lead the way on the restart on Lap 8 followed by Preece and Bowyer.

Logano grabbed the lead on the start of Lap 9 and immediately moved out to a big lead.

Nemechek again spun on Lap 12 on the backstretch to bring out another caution. This time, his No. 38 Ford suffered serious damage in the incident.

The race returned to green on Lap 15 with Logano out front followed by Ty Dillon and Blaney.

NASCAR threw a competition caution on Lap 26 to allow teams to check for tire wear due to the heavy rains earlier in the day. Most of the lead-lap cars elected to pit with Bowyer the first off pit road.

With 20 laps remaining in the first stage, Bowyer had moved out to a more than 1.2-second lead over Blaney. Logano ran third, 1.7 seconds behind the leader.

After 50 laps, Bowyer had built a more than 2 second lead over Blaney with Bowman having moved up to third.

NASCAR at Darlington will not start on time due to rain

Kyle Busch turns Chase Elliott, admits "I made a mistake"

With recent speed, Bubba Wallace and RPM "knocking on the door"