Denny Hamlin was among those who elected not to pit and claimed the Stage 2 win at Sonoma. 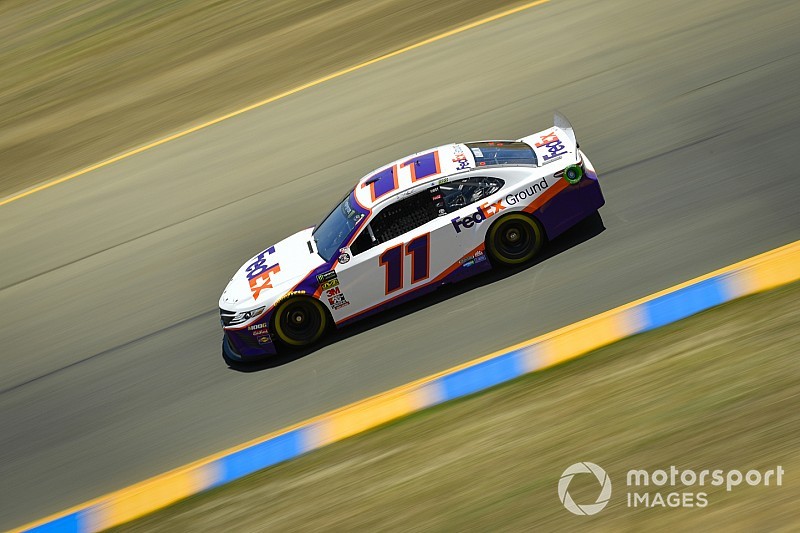 Hamlin and five others decided not to pit before the end of the second stage. Hamlin held off Brad Keselowski to take his second stage win of the season.

Following the break between Stages 1 and 2, Elliott – who had pit before the end of Stage 1 – inherited the lead. Hamlin was the first off pit road among those who elected to pit.

On the restart on Lap 25, Elliott was followed by Truex, Kyle Busch, Ryan Blaney and Logano. Hamlin lined up 16th.

Truex got around Elliott in Turn 1 to take the lead for the first time in the race.

On Lap 28, Kyle Busch got around Blaney to take third as Clint Bowyer reported he may have a loose wheel. Bowyer quickly dropped down pit road to address the issue.

After 30 laps, Truex had moved out to a 1.7-second lead over Elliott. Kyle Busch ran third, Blaney fourth and Matt DiBenedetto was fifth.

Aric Almirola spun off Turn 4 into the grass on Lap 31 but was able to continue on without incident.

Ross Chastain also spun off Turn 4 on the following lap and was also able to continue.

Paul Menard spun out in Turn 11 after contact with Michael McDowell but he was able to continue and no caution was called.

With five laps remaining in the second stage, Truex held a 2.6-second lead over Elliott as Kyle Busch remained in third.

Kurt Busch and Erik Jones were the first to elect to short-pit, heading down pit road on Lap 36. Almirola also pit on Lap 37. On Lap 38, several others followed including Jimmie Johnson, Bowyer, Alex Bowman and McDowell.

After several more stopped, Hamlin took over the race lead with two laps to go in the stage. He was followed by Keselowski and Stenhouse.