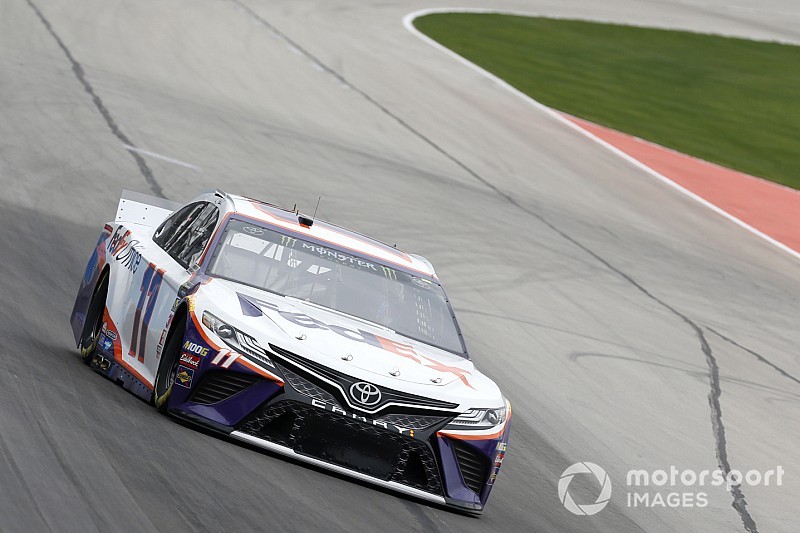 Denny Hamlin used a late-stage no tire strategy to take the lead claim the Stage 2 victory at Texas Motor Speedway.

Hamlin pit late in the stage for fuel only and was able to hold off Ryan Blaney for the stage win. Daniel Suarez was third, Kyle Busch fourth and Paul Menard completed the top-five.

Following the break between Stages 1 and 2, most of the lead-lap cars elected to pit with Kyle Busch the first off pit road following a two-tire pit stop.

Six cars, led by Martin Truex Jr., remained on the track and he inherited the lead when the race returned to green on Lap 93. He was followed by Kurt Busch, Clint Bowyer and Kevin Harvick.

Before the race went green, Brad Keselowski came down pit road and appeared to have lost power.

On Lap 97, Kyle Busch made his way up to second following a pair of three-wide moves on the frontstretch to gain position. Elliott moved into third.

Busch went around Truex off Turn 2 on Lap 99 to take the lead for the first time in the race.

On Lap 105, Keselowski’s team pushed his No. 2 Ford to the garage. “Something just broke,” Keselowski said.

Chase Elliott got around Kyle Busch off Turn 2 to grab the lead on Lap 109.

With 55 laps remaining in the second stage, Elliott held a small advantage over Kyle Busch with Joey Logano in third. They were followed by Kurt Busch and Truex.

Elliott maintained less than a second advantage over Logano with 40 laps left in the stage. Kyle Busch was third, Kurt Busch fourth and Harvick had moved back up to fifth.

On Lap 139, Kurt Busch was the first to head to pit road to complete a green-flag pit stop to take on tires and fuel to make it to the finish of the stage. Many others dropped down on Lap 144.

On Lap 149, smoke began billowing from Kyle Larson’s No. 42 Chevrolet after he tagged the Turn 2 wall and it appeared he dropped fluid on the track as he maneuvered his way down pit road.

The remaining lead-lap cars pit with Hamlin the first off pit road taking fuel only, followed by Kyle Busch, Blaney and Suarez. The race returned to green on Lap 159.

Logano was penalized for an uncontrolled tire and had to restart from the rear of the field.

With five laps left in the stage, Hamlin maintained a small lead over Kyle Busch as Blaney had moved into third.