Dodge brings back the Charger 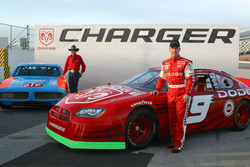 Dodge presentation: Richard Petty and his 1970s-era Dodge Charger with Jeremy Mayfield and his 2005 Dodge Charger.
Photo by Motorsport.com.
Riding the waves of Dodge's success in NASCAR Nextel Cup Series racing since returning to the sport in 2001, the new Dodge Charger race car will make its NASCAR Nextel Cub Series debut in the Daytona 500 at Daytona International Speedway on Feb. 20. Four Dodge factory-backed teams, including 10 drivers, will compete in the Daytona 500.

"Racing is the core of Dodge's DNA, and we're excited to bring back a car that has an accomplished and heralded record as the Dodge Charger," said Darryl Jackson, Vice President -- Dodge Marketing. "The Dodge Charger is firmly woven into the all-American culture and heritage of stock car racing. The all-new Dodge Charger will exhibit a modern upgrade to the same kind of power, performance and style that it represented throughout its gloried stock car history."

"When the 2005 Dodge Charger race car hits the track in February for its first race, Dodge will be prepared to carry the winning tradition that legends including David Pearson, Bobby Isaac and Richard Petty established with their Chargers in the '60s and '70s," said John Fernandez, Director, Dodge Motorsports Operations. "Today's Dodge racing heroes will make the Charger famous again.

"Dodge has an incredible heritage in auto racing, and the return of the Dodge Charger makes the statement that we will continue to make our mark in NASCAR's history books," Fernandez added. "The new Charger is a natural evolution for the Dodge brand that has our NASCAR Nextel Cup teams energized and eager to start the 2005 season." 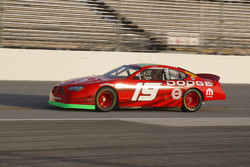 The development of the race car was led by Dodge Motorsports Engineering with the support of each of Dodge's primary Nextel Cup Series teams: Evernham Motorsports, Petty Enterprises, Chip Ganassi Racing with Felix Sabates and Penske Racing South. Much of the on-track testing was done by veteran driver Bill Elliott. NASCAR approved the race car for competition in August.

"While we worked within NASCAR's templates, we found innovative ways to build great horsepower and aerodynamic performance into the Charger," said Ray Evernham, President and CEO of Evernham Motorsports. "We are looking forward to putting the Dodge Charger in the winner's circle of the 2005 Daytona 500."

Is it time for NASCAR to consider a spec engine?