Dodge’s Brad Keselowski is the most recent winner at the 2.66-mile track, leading the final two laps en route to victory in this year’s spring event. Keselowski scored his first career Sprint Cup win at Talladega in 2009 prior to joining Penske Racing and Dodge. 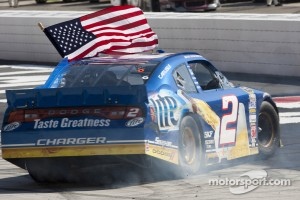 QUOTE OF THE WEEK "Talladega seems like it's all about the draft, who your drafting partners are, when to make your move, how to avoid the big wreck, etc., etc. But all of that assumes that you've got a fast enough chassis and a strong enough engine that you can do all of the above. Casual fans might assume the speed in these cars is a given but engineers work every bit as hard during Talladega week as any other week of the year, squeezing every last bit of speed out of every component. Aerodynamics, horsepower, handling considerations, and even the cooling system are front and center for every engineer in the series this week. You won't win Talladega on Sunday if every one of those boxes aren't checked on the engineering to-do list." Howard Comstock, SRT Motorsports Engineering

DODGE QUOTES On being a media favorite and the Chase: “There are seven races to go. It feels great to win. I'm so proud of my team. But I can't state loudly enough how much longer this battle is. It's very tempting, whether it's the media or the teams themselves, to get in a comfort zone of saying, such and such has control of this Chase. But there's a reason why it's 10 rounds. We're not even halfway. We're three rounds in. By no means do I feel like we're the favorite. Certainly, we're not the underdog at this point. But I think there's so much racing to go, so many opportunities for things to go wrong or right for anyone out there. It's way too early to point those fingers and say those things. My perspective is we’ve got a lot more racing to go. Let's just let the racing play out and go from there.” Brad Keselowski, No 2 Miller Lite Dodge Charger

On returning to Talladega as the points leader: “Honestly, I had a great feeling about Dover all week. I know a lot people expected us to struggle, just by looking on paper at our average finish. That’s not always the best way to judge this Miller Lite Dodge team. I really don’t feel like we have any weaknesses on our team. In our two Chase wins we’ve won on pure speed and we won on fuel mileage. To me that’s covering all of your bases. Now we get to part of the schedule where I think our strengths will shine. I love racing at Talladega. We have a lot of confidence going back there as the winner of the spring race. There is still a lot of racing left to go in this Chase, but I like our position in the standings, for sure.”

On racing this weekend at Talladega: “I couldn’t be prouder of the guys on the Miller Lite Dodge for the work they’ve put in all year, but especially over the first three races in the Chase. We’ve taken tracks that were perceived weaknesses and shown that they are anything but that. Like Brad has said, there is a lot of racing left in this Chase, but we’re now getting to a part of the schedule where we feel like we can extend the points lead. It starts this weekend at Talladega. It’s obviously a great track for Brad.Penske Racing, as a group, has been very competitive on the restrictor-plate tracks this season. I think we’ve learned a few things since then that will make us even more competitive this weekend.” Paul Wolfe, crew chief, No. 2 Miller Lite Dodge Charger

On racing at Talladega: “Pack racing, tandem racing…we’ve seen a little of everything at Talladega over the last few seasons. But no matter what brand of racing prevails there, the strategy is always the same. It’s a survival situation. You have to be around at the finish. Talladega has always been a wildcard race and it always will be. The Superspeedways remind me of IndyCar Series racing because the outcome depends mostly on aerodynamics. It's like a chess game where you are trying to figure out what to do as the race progresses to position yourself correctly.”

On his most recent Cup race at Talladega at the AMP Energy 500 in Oct. 2010: “It was definitely the strongest car I’ve had in a restrictor-plate race. It was strong enough that we got slapped with a speeding ticket with 40 laps to go and still came back to the front in no time at all. We lined up fourth on a restart with four laps to go and had a great feeling that our day could end up in Victory Lane. Unfortunately, a couple of guys that I had worked with all day weren’t in position at the end to help us out. I remember wishing that we had one more lap because our car was that good. We had to settle for a 15th-place finish there that day with a car that could have won the race.” Sam Hornish Jr., No. 22 SKF Dodge Charger

Chevrolet drivers head to Talladega where anything can happen