Does victory await Clint Bowyer at Bristol this weekend? 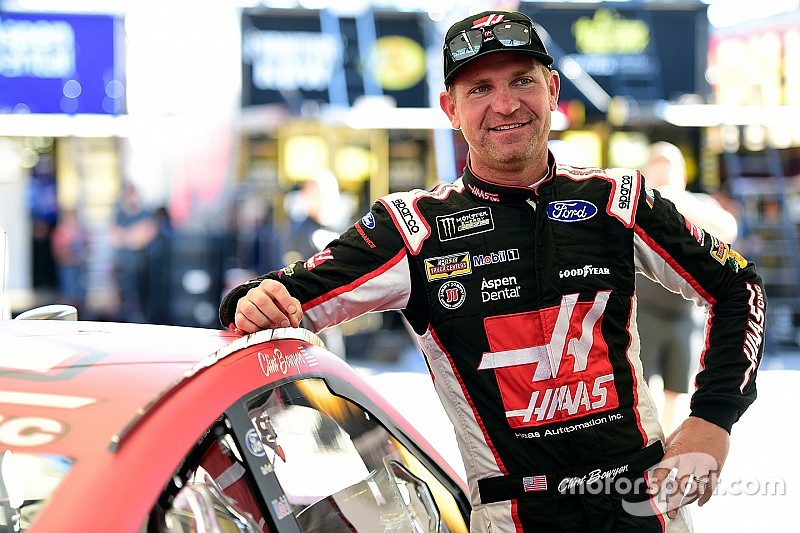 Like most of his fellow competitors in the Monster Energy NASCAR Cup Series, Bowyer, 37, cut his teeth on short tracks. Even as he suffered through last season at HScott Motorsports, Bowyer managed to finish eighth at Bristol last spring, one of just three top-10 finishes in 2016.

Short track racing is the "best product" in NASCAR

After a week off from competition, there’s no better venue than a short track to reignite the NASCAR tour. And for Bowyer, Bristol could provide the perfect stage to score his first win behind the wheel of the No. 14 Stewart-Haas Racing Ford.

“You would have to really sell hard for me not to believe that short-track racing is our best product,” Bowyer said. “It just is, and the reason I say that is because it’s so much fun, so demanding inside the car. The work load is through the roof for the driver, and the excitement is there for the fans.”

There is nothing in this sport at this level that comes easy.

As one of the more affable drivers in the sport, Bowyer has avoided the traditional run-ins with his peers. Sure, there was the 2012 season when Jeff Gordon's No. 24 car was a trouble magnet for Bowyer. But as he enters the half-mile bullring this weekend, Bowyer does so with a clean conscience. That doesn’t mean that tempers can’t flare over the course of a 500-lap contest.

To avoid lingering bad feelings, Bowyer believes the best defense is to defuse a potential rivalry before it has time to accelerate.

“If you wrong somebody on any racetrack, you try your best to right that wrong immediately,” he said. “First thing, you push that push-to-talk button and have your spotter go down there and take the butt-chewing for you and apologize on your behalf. But that doesn’t work. You just hope that if something happens, he’s not going to be able to get it fixed and get back out there and repay you before you have a chance for him to think about it and get over it, maybe, until next week.”

In 22 starts at Bristol, Bowyer has six top-fives and 10 top-10 finishes. His pair of career-best third-place results occurred during his days with Richard Childress. However, Bowyer's new and not-so-new teammates Kurt Busch and Kevin Harvick have led 530 of the possible 3,014 laps raced at Bristol since moving to Stewart-Haas Racing in 2014. Harvick won the last race at Thunder Valley and finished seventh in the spring. Busch has two top-five finishes in his last five starts.

Among the resources Bowyer has discovered at SHR, one favorite aspects is the wealth of knowledge that resides with his teammates.

“This is an opportunity that doesn’t come along very often, whether it was my first opportunity in this sport or my last, to drive for this manufacturer, Ford, and the support they are giving us – everyone at Stewart-Haas, the management and sponsors and my teammates. You don’t put enough emphasis on the impact a good teammate can have on you. Drivers capable of winning races and championships.

“I have two championship-winning drivers (Harvick and Busch) as teammates. Danica (Patrick), everything she brings for our entire sport, let alone the company. This is the opportunity you are giddy about no matter where you are at in your career.”

Despite aligning with a new team and a new crew chief, Mike Bugarewicz, Bowyer is currently ninth in the Monster Energy Cup standings — one position ahead of Harvick. Along with a third-place finish in Fontana, Bowyer has three top 10 and an average finish of 96.6-percent. He’s also completed 96.6 laps but has yet to lead a circuit.

As competitive as the Cup tour currently is, Bowyer knows he’ll have to step up his game to be a contender in the Playoffs.

“There is nothing in this sport at this level that comes easy,” Bowyer said. “It doesn’t matter the racetrack or circumstances, it is always hard because there is always the next guy working every bit as hard to accomplish the same goal.”