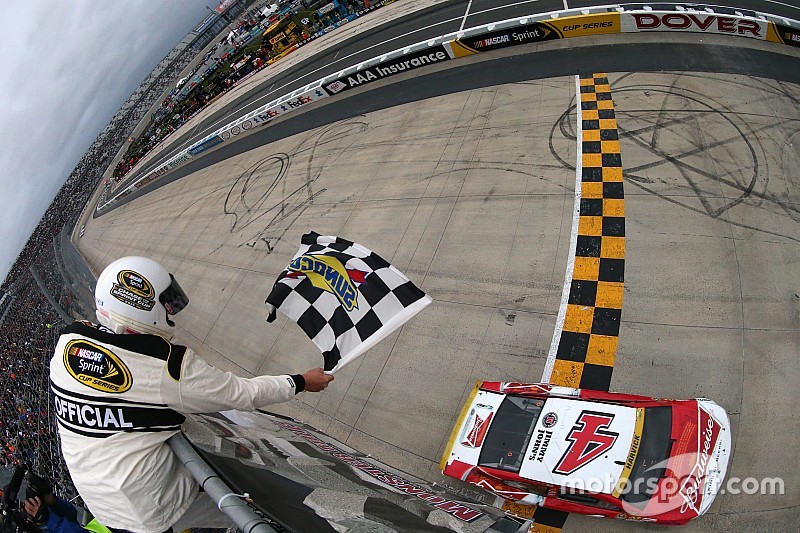 Non-Chasers show up in the playoffs at the Monster Mile, while contenders take different approaches to Sunday's setbacks.

Two days before Richard Petty Motorsports' announcement of extending its relationship with Ford Performance on Tuesday, Aric Almirola was best in class for the Blue Oval Brigade at Dover International Speedway.

Almirola’s fifth-place finish in the AAA 400 on Sunday was his second top-five result and third top10 finish in the last four races.

“That was a good run for us,” Almirola said. “I’m really proud of the guys.  That’s two top-5s in a row here at Dover.  It was a really good job.  We just struggled with getting the car in the race track most of the day and right there at the end four tires paid off for us.

“That was some really good adjustments by Trent (Owens, crew chief) and the guys and the pit crew did a good job getting me off pit road and just a really solid day for us.”

Almirola was the top non-Chase driver on Sunday. He missed qualifying for the Chase by 17-points.

For Stenhouse, the second-highest finishing Ford, the result was just the No. 17 team’s second top 10 finish of the season.

“Great job there guys, stuck with it all day, made good changes, brought a fast race car,” Stenhouse told the crew. “Appreciate that, on to the next one.”

“Nice work,” replied crew chief Nick Sandler. “That’s the kind of run we need to be having.”

On the bright side

Kurt Busch didn’t exhibit the level of speed his Stewart-Haas Racing teammate — and eventual Dover winner — Kevin Harvick had on Sunday, but the No. 41 Haas Automation was in the ballpark prior to the last 90 laps.

Busch recovered from a tight condition after contact with Carl Edwards on pit road. He was running third when he entered the pits on the sixth caution on Lap 312 but issues with a left front jack bolt lowered the car’s ride height and Busch sustained significant damage to the splitter as it dragged on the track.

“Where’d we finish,” Busch asked after the race.

“Good, that’s what we got to do right there guys,” Busch added. “Figure out a game plan, apply it, survive it. Now we're back on even ground. Now we go win Charlotte. Thank you.”

“Thank you,” Gibson replied. “I’m sorry that happened, we’ll figure it out. We’ll fix it…way to fight everybody.”

Last year, Busch was eliminated in the first round of the revamped Chase for the Sprint Cup. After the third race in the Challenger Round, driver points have been reset to 3000.

Clearly Kevin Harvick was the class of the AAA 400 field on Sunday, but second-place Kyle Busch took the defeat in stride.

Busch crossed the finish-line 2.6-seconds behind the No. 4 Chevy — and just one point ahead of fourth-place Jamie McMurray, who watched his Chase dreams crumble after losing a tiebreaker with Dale Earnhardt Jr.

Although Busch is generally a sore loser, the bigger Chase picture elevated his hopes.

“We didn't have anything for that 4 but maybe we’ll have something for him next time,” crew chief Adam Stevens said on the radio. “Thank you Kyle.”

“You got it man,” replied an upbeat Busch. “Awesome job today guys, Thank you very much. You have to have a good car to be able to perform like that so you guys did everything right, there. I appreciate that. Good work.

“Let’s take a breather now and go get them the next round. Like I said, there ain’t no give up in the 18, let’s keep doing it boys.”

Although Hamlin had a hall pass to the Contender Round after winning at Chicagoland Speedway, Sunday's 18th-place finish did not sit well with the driver.

Yes, Sunday was a rough day at the office for Hamlin. The No. 11 Fed Ex Toyota was busted for speeding on pit road not once but twice and Harvick lapped Hamlin 87 circuits into the contest. Hamlin did not return to the lead lap until Lap 376 when he became the beneficiary.

Rather than reflect on the team’s own shortcomings, crew chief Dave Rogers took umbrage at Harvick’s dominant Dover victory.

“He took the hot rod and just fenced it hard right in front of us,” Rogers said to Hamlin after watching Kevin Harvick’s celebratory burnout. “Drove it straight into the fence. Be awfully hard to tech that one.”

“It’s absolutely, crap," said a voice over the No. 11 team radio that was not immediately identifiable. "Now he’s burning the tires off of it — just blew ‘em off. Just ripped the quarter-panels off…tell me that car is legal.”

Kevin Kidd filled in for No. 16 crew chief Matt Puccia, who became a new daddy over the weekend.

Following Greg Biffle's 13th-place finish, the Roush Fenway Racing Sprint Cup Team Manager thanked the driver and the crew before announcing he was returning to his day job.

“Not a perfect day, but a decent one," Kidd said. "That was fun. I’m officially retired again.”