TV star teams up with Bowyer

The NASCAR Sprint Cup Series travels to Texas where everything is bigger the locals claim. One thing that is big for many Texans is hunting season. Clint Bowyer may gain some new fans, if he hasn’t already, with the paint scheme that adorns the No. 15 Toyota for the Duck Commander 500 at Texas Motor Speedway this weekend.

Duck Commander, founded in 1972 by Phil Robertson, builds custom duck calls for hunters. His son Willie, along with his family, expanded the business. Several of those ventures, including Duck Commander, are featured on Bowyer’s No. 15 Willie’s Duck Diner Toyota at Texas.

Hunting bucks and ducks, however, will have to wait until after Sunday’s 501-mile event. Fortunately, Bowyer and his No. 15 crew know what the target is- victory lane. 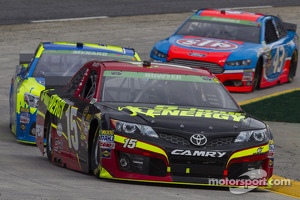 What do you expect with the new rules packages at intermediate tracks? “The same thing. I think if our car was fast at Vegas then I’m pretty excited about going to Texas, Charlotte and those tracks. We had good speed in our car at Vegas and I think that’s what it takes to go fast on those big, fast high-banked race tracks. You just have to go.”

Talk about your relationship with Willie (Robertson). You have a few of the businesses associated with him on the car this weekend. “I’m looking forward to seeing those guys. They are great. I tweeted something about Willie being my boss this weekend. They’re just a fun group to hang out with. Miss Kay is awesome. She is a big fan. I’m happy we can have some of his logos on the car– his new diner– Willie’s Duck Diner and the Duck Commander. Like I said, they are a fun group. I had a good time being on their show (Duck Dynasty). They tease me a lot about it but it was fun. It’s amazing how many people watched it. Anyway, looking forward to the weekend. Hope we can have a big old party in victory lane.”

Harvick eyes a win in Texas