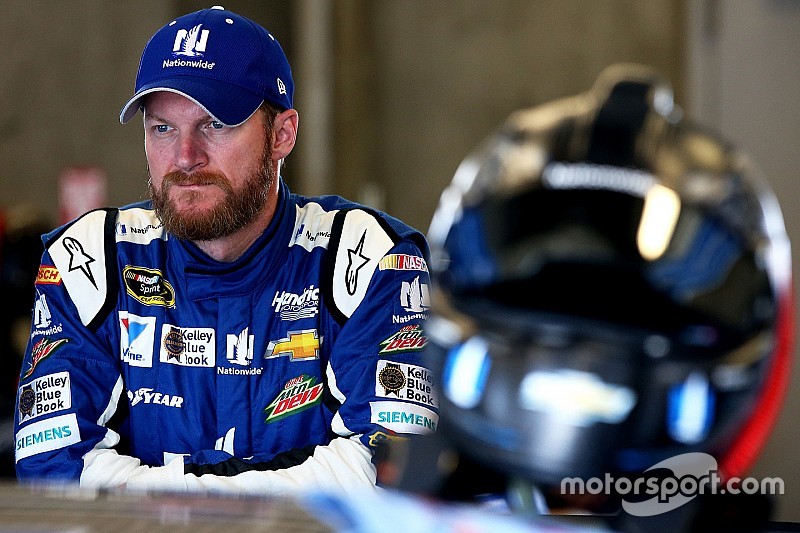 The Sprint Cup seasons of Jamie McMurray and Dale Earnhardt Jr. hinged on a single point.

After 400 miles on Sunday, the drivers were dead even with 2,098 points. But, under a NASCAR tiebreaker system based on best finish in the current round of the Chase, it was Earnhardt’s third-place finish — one position ahead of McMurray — that decided which competitor moved on to the Contender Round and which driver was knocked out of the playoffs.

Earnhardt remains a contender for the Sprint Cup Series title. McMurray's first visit to the Chase came to an end almost as quickly as it began.

“We had a pretty good car,” Earnhardt said. “I thought we were about the third-to fifth-best car, and we just fought all day for track position, and we passed a lot of cars and had a lot of fun.”

McMurray started the race 11th— one position ahead of Earnhardt. On the third caution, the No. 88 Hendrick Motorsports Chevy moved ahead of McMurray for the first time in the race. The advantage was short-lived. Crew chief Greg Ives told Earnhardt to return to the pits due loose lug nuts on the left rear wheel. He dropped from seventh to 19th.

Earnhardt went on a mission. As McMurray continued his course in the top 10, Earnhardt battled to catch him. Race leader — and eventual winner — Kevin Harvick kept knocking drivers off the lead lap. Before he could reach Earnhardt, the No. 88 passed the No. 1 Ganassi Racing Chevy and McMurray was lapped by Harvick on Lap 186.

McMurray, who was 13th at the time, returned to the lead lap as the highest-scored lapped car under the fourth caution on Lap 192. Earnhardt restarted 12th on Lap 206 with McMurray two spots behind.

The No. 88 Chevy gained two positions before the fifth caution on Lap 231 — and two more on the pit stop. He was comfortably among the top five when AJ Allmendinger triggered the sixth caution and held onto the position over the next 40 circuits when the seventh caution was called for Brett Moffitt's spin in Turn 1 on Lap 354.

Saved by the yellow

Plagued by a vibration during the preceding run, Earnhardt pitted in the nick of time, and his crew fixed yet another loose wheel. He lined up seventh on the Lap 359 restart — one position behind McMurray.

“The left rear was falling off,” Earnhardt said of the serendipitous caution on lap 354.“I was a couple laps from coming in.It was shaking real bad in the corner, and it started shaking on decel, and I knew it was a matter of time before it was coming off.

I'm not disappointed. Our goal at the beginning of the year was to make it into the Chase ... Just needed one more point

After the eighth caution and a restart on Lap 377, Earnhardt kept McMurray in his rear view mirror as he moved forward to a third-place finish.

Over the second half of the race, Earnhardt pestered crew chief Greg Ives for updates. As he pulled on to pit road, he asked, “Did we make it to the next round?”

McMurray makes a run at it

Earnhardt was worried the No. 88 team was not “going to really advance.” The good news was clearly a relief particularly with the speed McMurray picked up in the closing laps.

“Jamie, he took off on that run before last with about 50 to go, and I didn't see that kind of speed in his car all day, so it kind of surprised me, but I thought we were going to get to him and get around him, but he took off with the laps running out. But we had a late caution and got around him, him and Matt (Kenseth, who finished seventh) down there on Turn 3 and 4 on the outside.

“Jamie was trying to squeeze down in front of Matt into Turn 3 and get to the bottom, and they really slow‑rolled that corner for some reason, both of them, and I just went to the outside because it was about the only shot I had to pinch anybody down, pinch Jamie down if I could get to his quarter-panel, and that's how it worked out."

Entering his first Chase, the ever-pragmatic McMurray believed that an average finish of 15th would advance the No. 1 CGR team to the Contender Round. But despite finishing 16th at  Chicagoland Speedway, 14th last weekend at New Hampshire Motor Speedway and fourth at Dover — his fate was decided by one point.

“Just needed one more point,” McMurray said. “He did a tremendous job of getting by me on the outside. When I got around Matt on the restart, I was waving frantically hoping that he would let me in. I had a little bit of a run and I got down in front of him and I never expected the No. 88 to be able to get by me on the outside. Once he got in front of me, it was real hard to pass."

Although McMurray acknowledged his car was the best of the season, that offered little comfort to the driver after the fact. Still, McMurray took solace in knowing the No. 1 crew is moving in the right direction.

“I'm not disappointed," McMurray said. "Our goal at the beginning of the year was to make it into the Chase and the unfortunate part is that we didn't run good enough in the first two races. We ran great today. Got a lap down and Matt (McCall, crew chief) did a great job adjusting on the car and make it a top five car. The crew did an awesome job today.

“I thought really just being consistent would get us in and it was close, but just needed one more point.”