Dale Earnhardt, Jr. led 295 laps to become the only race car driver to ever sweep both NASCAR races at Bristol Motor Speedway. In one weekend, the DEI Budweiser Chevy driver notched his first Bristol wins in both the NASCAR Nextel Cup and Busch ...

Dale Earnhardt, Jr. led 295 laps to become the only race car driver to ever sweep both NASCAR races at Bristol Motor Speedway. In one weekend, the DEI Budweiser Chevy driver notched his first Bristol wins in both the NASCAR Nextel Cup and Busch series' races. 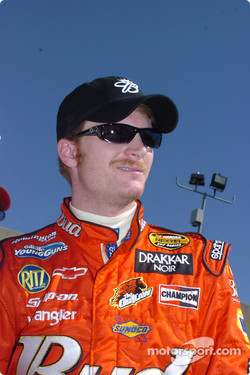 Dale Earnhardt Jr..
Photo by Jim Haines - IRL.
After dominating the Busch race Friday night, Earnhardt came back to put in his second dominating performance Saturday "under the lights", it is Earnhardt's fourth win of the season, and 13th of his career.

"I am worn out," said Earnhardt. "That was a long green flag run; I think it wore everybody out. This is one of the biggest wins of my career. This is huge for me, and awesome for my team, we really needed this.

"I never thought I would win a Busch race and a Cup race in the same weekend at Bristol. Good lord."

The No. 8 team took note of Earnhardt's Busch ride, mirroring the setup in that car to give Earnhardt an advantage Saturday evening. The gamble paid off, scoring Earnhardt the victory five years to the day his late father last graced victory lane here.

"It worked out," commented Earnhardt. "I learned a little bit about a different type of line to run last night. We had the same set-up we used in the car last night. That long green flag run, that was something; I have never seen anything like that here. We were out there leading, and I was just thinking of all the ways I could get my ass beat.

"We were real lucky."

Ryan Newman fought back from being 25th, one lap down to grab a second place result. A much needed effort by the No. 12 Dodge team, who had fallen out of tenth place three events ago. His strong finish this weekend propels him back into tenth in points, just one point shy of ninth.

"That was pretty tough, our team fell back and we fought back and the guys did an awesome job on strategy. Good points day for us. One of the most physical runs we have had all year. I am glad I am young and I have a good Gatorade bottle to drink out of.

"It is a good thing we are back in the top ten, and we have to just concentrate on the next two races."

Jimmie Johnson rebounded from a horrible run of luck over the last four weeks, including three DNF's, to garner third. Johnson's troubles seemed to come early this weekend, tearing the No. 48 Hendrick Chevy up in practice. Team 48 was forced to pull out the backup car, sending them to the 43rd starting position for the green flag.

"It was difficult coming from the back. We chose to pit quite a bit in the beginning to get our car right, and keep trying to get to the front. We got up there, stayed up there, and just fought for it all night."

Jeff Burton, making just his second start in the RCR No. 30 Chevrolet, gave the team their best result of the season with fourth.

Elliott Sadler continues to wow, under the tutelage of crew chief Todd Parrott, keeping his nose clean all night and turning in a fifth-place performance. It was Sadler's best ever finish at the ? mile speedway, and his first top-five finish in the No. 38 RYR ride. Sadler scored his first win with the Woods Brothers at Bristol in 2001.

"That's a good run," Sadler said. "I love this place. I love my race team because they never give up on me. We battled a tight race car all night and they made a good adjustment. I know Dale Jr. is happy about winning, but doggone he ain't much happier than I am for finishing in the top five.

"This is great for our points deal."

The race was marred with several multi-car crashes, slowing the field nine times for 63 laps.