MARTINSVILLE, VA - Speedweeks for Dale Earnhardt, Jr. came in with a bang and went out with a whimper. After dominating victories in the Bud Shootout and the Twin 125 race, Earnhardt seemed a lock to win the Daytona 500. It was just not meant to be.

MARTINSVILLE, VA - Speedweeks for Dale Earnhardt, Jr. came in with a bang and went out with a whimper. After dominating victories in the Bud Shootout and the Twin 125 race, Earnhardt seemed a lock to win the Daytona 500. It was just not meant to be. Earnhardt lost three laps, after having to pit to change a faulty battery. He finished a disappointing 36th. 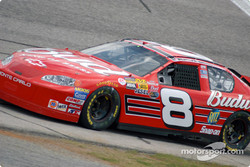 Dale Earnhardt Jr..
Photo by Richard Sloop.
Rockingham, the following weekend, would not balm his ennui. A strong qualifying effort of 12th buoyed the No. 8 team, but an early race incident with Jeff Gordon dashed his chances of bouncing back from the previous weekends fiasco.

The contact with Gordon, damaging Earnhardt's left-front fender, was just the beginning of an unglamorous day. All in all, Earnhardt embroiled himself in four of the day's seven caution periods. When all was said and done, he ended up three laps down in 33rd.

"We just didn't have a good car, kept spinning out," Earnhardt said of The Rock. "I don't think we've had a good finish here since I started racing. Expectations weren't high."

It seemed that the 'golden son' was not so fair haired after all, perhaps he was more fallible than anyone had realized, and his place in history no so secure. Or so they wrote. But it's a long season filled with ups and downs and nary impossible to start betting on so early in the year.

In the seven weeks since, Earnhardt has rallied himself and the No. 8 DEI team to championship contention. He has five top-three finishes (including a trip to the winner's circle at Talladega) that have catapulted him from 38th to second in series standings.

Earnhardt also changed the NASCAR history books this year. His win at Talladega makes him the only racer in the sport to ever win four consecutive races at the 2.66-mile tri-oval. Albeit that win entangled Earnhardt once again in controversy over NASCAR showing him favoritism.

You can argue the 'out of bounds' call to we are all blue in the face, but it isn't going to discount the season the No. 8 team has carved out for themselves. Strong runs at Vegas, Atlanta, Darlington, Texas and Martinsville have backed up Earnhardt's desire to win the championship with actual proof of his ability.

Although he's not picking out a place in his house to display the Winston Cup, well not just yet. 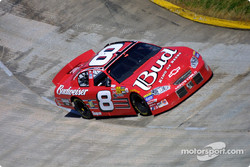 Dale Earnhardt Jr..
Photo by Thomas Chemris.
"I'll believe it when we win it," he commented. "This is a long season and a lot can happen. We were in this same situation last year, coming out of here with a top five finish. We were solidly in fifth or so in the points going into our first weekend off and didn't have much of a season after that until the end again.

"I feel like we can do this all year long. If we do, we do. We've got to keep trying to keep working hard. We can't get really lackadaisical or too confident. We have to continue to have a lot of respect for our competition and where we stand up against them at some of these race tracks we're coming up to - like Pocono and what-not."

Earnhardt who's often portrayed in the media as a brash 'young gun' (terminology this particular reporter finds putridly dull at best) has emerged this season not only as a seasoned racer, but also as a competitor whose team chemistry is being complimented by an emerging maturity.

As Earnhardt bounded from his Chevy Monte Carlo yesterday after the Virginia 500, and made a round of congratulatory handshakes, there was a certain joie de vive in his step of genuine joy for those who had finished ahead of him. Seemingly making the son of the legend suddenly fill the shoes of being an elder statesman as well.