Dale Earnhardt, Jr. didn't lead every lap, or dominate the day as DEI cars tend to do on restrictor plate race tracks. But, winning pit strategy at the races closing laps gave Earnhardt all he needed to wheel the No. 8 Budweiser Chevy into victory ...

Dale Earnhardt, Jr. didn't lead every lap, or dominate the day as DEI cars tend to do on restrictor plate race tracks. But, winning pit strategy at the races closing laps gave Earnhardt all he needed to wheel the No. 8 Budweiser Chevy into victory lane at Talladega Superspeedway for the fifth time in his career. 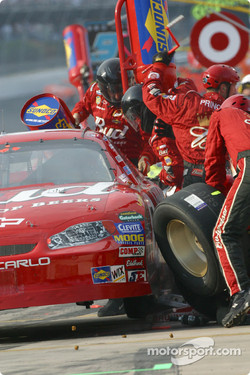 Pitstop for Dale Earnhardt Jr..
Photo by Eric Gilbert.
"That call was awesome," remarked Earnhardt. "We came down pit road and the yellow came out and we were saying two tires, two tires and we just smoked them guys that were on old tires. The car just drove right around into the corner.

"The body was awesome. I beat the front bumper all to hell today and it's still there. That's five wins this year, I just can't believe it."

The win marks Earnhardt's fifth win of the season, and fourteenth of his career.

"I don't think we would have won the race today, if we wouldn't have put two tires on it," said Earnhardt, whose team chose to give him fresh rubber at race end as many other cars chose to only get gas.

Many teams mounted a charge against Earnhardt including the Richard Childress Racing cars of Jeff Burton, Robby Gordon and Harvick. They all hooked up with 17 laps to go, and Harvick managed to get the lead from Earnhardt briefly, but the No. 8 Chevy went high and sailed his ride back into the race lead.

The RCR cars just did not have the horsepower to run with the team DEI cars. Final pit stops at lap 178, however, saw strategy reset the grid before the green flag waved for the final circuit of the race.

Earnhardt went from first to mid-pack, after taking two-tires while many other cars got a gas-and-go, while the RCR cars of Harvick and Gordon grabbed the 1-2 with five laps to go.

Earnhardt with drafting help and fresher tires powered the No. 8 Chevy back into the lead with two laps left to be completed. Tony Stewart got into the mix at the end, trying to find a line around Earnhardt, but in the end it was all Earnhardt as he took the checkered flag as cars wrecked all around him on the final lap.

The No. 9 of Kasey Kahne, the No. 15 of Michael Waltrip and the No. 16 of Greg Biffle got together on the white flag lap, and one turn later, Elliott Sadler got stepped out of line by a bump from the No. 10 of Scott Riggs, and in a bit of d?j? vu; flipped over before landing on the infield grass.

Kevin Harvick held on for second. 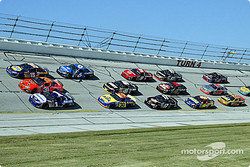 Three-wide at Talladega.
Photo by Michael DOrnellas.
"We worked hard all day," Harvick said. "We got up there and we were in the lead and I knew they were going to be coming. With Robby (Gordon) behind me, there wasn't anybody in the field who was going to pass us, except the No. 8 car."

"Everybody did a great job," said Jarrett. "But then it gets down to that time that you want to get as many positions and everybody wants to try and win.these guys did a great job and I am awful proud of them."

"It was fun today," Busch said. "That 8 car is awesome. Congratulations to them. Dale Jr. is awesome when you come to a restrictor plate race track. We got a top five and Dale Jr. is atop us in the points again. This was a great race for us."

The only bad news for Earnhardt may be a slip of a tongue on camera, where he used a colorful four letter word. NASCAR drivers were warned earlier in the season that using foul language on television would result in a fine and possible dock of points.

Uncharacteristically, racers avoided the 'big one' usually associated with Talladega. There was only one multi-car crashes during the event, and unusual turn for restrictor plate racing at Talladega. On lap 144, Jimmy Spencer, Jeremy Mayfield and Bobby Hamilton, Jr. were swept up in a wreck after the No. 02 of Hermie Sadler bumped the No. 43 of Jeff Green shooting him up the racetrack, head first into the wall. No one was injured in the accident.

The other crashes involved one or two cars, resulting in five cautions for 22 laps. Notably, there were 47 lead changes among 20 drivers.