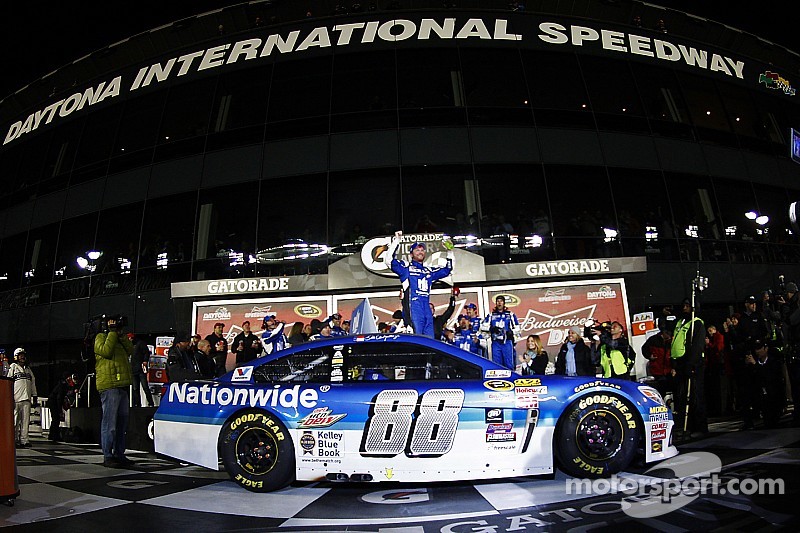 Justin Marks and Ron Hornaday Jr. failed to race their way in.

Dale Earnhardt Jr. held off Hendrick Motorsports teammate Jeff Gordon to win the first of two Duels at Daytona tonight. Jr. had started the Duel from last place. Justin Marks and Ron Hornaday Jr. have both been eliminated after failing to race their way in.

"We have had a great car all week," said the winner. "I’m so glad to be able to get through the Duel in one piece because I know how good this race car is. We have a couple more practices to go through and try to stay out of trouble during those and put this thing on the grid."

"We are going to have a fun day on Sunday. We had to do a lot of blocking there at the end, but those guys were mounting some pretty hard charges. We made a lot of good moves tonight because the car is so good.  TJ Majors (spotter) deserves a ton of credit for helping us win that race tonight. He called a great spotting job up on top of the hill there.He gave me all the information I needed to make the moves I needed to kind of keep them guys behind me.  It was hard to keep them all back there they were stacking up.”

The race was interupted by two caution periods. The first was due to an engine failure on Casey Mears' car. After that, Johnny Sauter was sent for a while ride through the infield grass off the nose of A.J. Allmendinger, who also exited the race as a result of the damage. The third set-up a six-lap dash for the flag when Trevor Bayne lost control and tagged Kyle Larson, who came down onto Ty Dillon as a result.

Collision under the lights at Daytona

Ragan takes a ride through the grass