It's not often that 2002 Cup series champion Tony Stewart feels delighted after a second place finish. Yet, that is just what happened after the season-opening event, where Stewart helped push Dale Earnhardt, Jr. to his first Daytona 500 ...

It's not often that 2002 Cup series champion Tony Stewart feels delighted after a second place finish. Yet, that is just what happened after the season-opening event, where Stewart helped push Dale Earnhardt, Jr. to his first Daytona 500 victory. 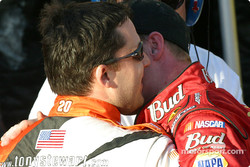 Tony Stewart congratulates Dale Earnhardt Jr..
Photo by Eric Gilbert.
"Tickled?" A reporter asked. Yes. That's right, Stewart known for his outbursts and hard-edged competitive nature was actually pleased with the runner-up spot. It was a slightly softer side of Stewart, rarely seen by the NASCAR media core.

"Considering what this kid went through losing his father here at the Daytona 500 and knowing how good he's been here and just something happened," continued Stewart. "It's nice seeing him get his victory here, too. I think his father's really proud today."

Earnhardt still visibly exhausted from his back-to-back wins in the Cup and Busch series races at Daytona, reiterated that he and Stewart have become buddies on and off the track during a media tour in New York City Tuesday.

"I'm not real sure," said Earnhardt of exactly when he and Stewart became friends. "I was trying to think back. We ran into each other in the Busch Series a couple of times. We had some pretty colorful arguments. At Pikes Peak, we got to beating and banging on each other. And I ran into him about six or seven times trying to get by him. He sent me into the fence on the restart. We ended up in the Busch hauler trying to get at each other and hollering and cussing and carrying on. 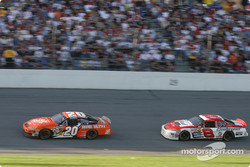 Tony Stewart and Dale Earnhardt Jr..
Photo by Eric Gilbert.
"And then the next week, we were in Milwaukee. He walked up to me and said he just wanted thing to be cool with each other. He said, 'I think you're cool and your dad is a good man and he's raised you well. I do have a lot of respect for you and I just want you to know that if you want to be friend, we can be friends'. I just thought that was cool. That's kind of when it started. That was back in '98 or '99. Ever since then, we've just gotten to be better friends year after year."

Perhaps it is the dichotomy of their two natures that makes the media curious about how the two became friends. Stewart, rough and tumble, vocal without thought and fiery; Earnhardt, funny and introspective, almost shy as he makes wisecracks. It seems an odd pairing, an unlikely m?lange of personalities.

"We got to be real good friends over the last year or so," said Earnhardt. "When he was catching all that stuff in the press about being crazy and wild, I just knew that wasn't the truth. I tried to stick up for him a couple of time. He appreciated that. We just got to be good friends and began hanging out a little bit."

As different as they seem, Stewart assures that he and Earnhardt are more alike than perceived.

"We admire each other," said Stewart. "We're fierce competitors, we like to have fun. We're very similar in a lot of ways."

Stewart and Earnhardt teamed up this year to compete in the Rolex 24, and it was obvious the chemistry between the two on the racetrack. The admiration society was also tangible during the Daytona 500.

After it's not very often Stewart is "tickled" to be the wallflower, instead of the lead date at the dance.