Dale Earnhardt, Jr. managed to find drafting partners to win the first Gatorade 125 qualifying event at Daytona International Speedway. Earnhardt will start third for the Daytona 500 on Sunday. "You put my car out front and it was a beast," said ...

"You put my car out front and it was a beast," said Earnhardt. "But I am just the same as everybody else from second on back." 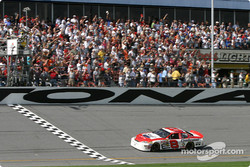 Dale Earnhardt Jr. takes the checkered flag.
Photo by Eric Gilbert.
The break of the race for Earnhardt came, when he was able to put the DEI Chevy out front in clean air, after teammate Michael Waltrip got mired with the lapped No. 24 Chevy of Jeff Gordon.

"These cars are just real tight from second on back," said Earnhardt. "From second on back they would just push real badly behind the leader. We got tires and I thought if we are going to be able to pass Michael (Waltrip) for the win, I have to do it the first five or six laps. So, he got stuck behind the 24, and I saw a hole and went for it."

Tony Stewart charged Earnhardt; but did not have the horsepower to overtake the No. 8 Chevrolet.

"Even if we would have had guys behind us we wouldn't have been able to get around the 8," said Stewart. "He was the class of the field again."

Finishing third was Jamie McMurray, who has had a rocket ship here all weekend with the No. 42 Ganassi Dodge.

"I think we had the best car on the first run," said McMurray. "I don't know if the track got tighter or what. I'm happy, and we're looking forward to the 500. We were just a little bit tight after the pit stop. I could really get through turns one and two well, but I couldn't get a run off three and four..I had more fun today than I've ever had superspeedway racing."

During the races initial twenty laps, Earnhardt struggled at the mid-pack point unable to find a drafting partner. Greg Biffle led the event, until a lap 20 accident involving The No. 10 of Scott Riggs sent the field down pit road. 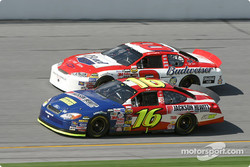 Greg Biffle battle with Dale Earnhardt Jr. for the lead.
Photo by Eric Gilbert.
Biffle's team was marred with a bad pit stop, putting the DEI cars of Michael Waltrip and Earnhardt into the 1-2 spots. Waltrip led until lap 37, when the No. 8 Chevy of Earnhardt managed to get past his teammate for the lead.

Notably, Jeff Gordon experienced engine problems and finished one lap down in 21st. Gordon got into the back of the No. 9 of Kasey Kahne on a series of pit stops at lap 23. Kahne was turned backwards into his pit box, losing valuable time, and Gordon experience nose damage.

Brendan Gaughan was the highest finishing Raybestos rookie of the year, in ninth.

"Daytona is definitely all about putting the Dodge into the right groove," commented Gaughan.

The last transfer spot in the first race was John Andretti in the No. 1 DEI Chevrolet.