Carl Edwards got his No. 99 Fastenal Ford Fusion back on the track to participate in single car runs during Friday’s second practice for Sunday’s Daytona 500. Edwards who has wrecked four race cars dating back to Preseason Thunder testing here at Daytona in January, and crew chief Jimmy Fennig talked about getting back out on the track and putting the bad luck behind them. 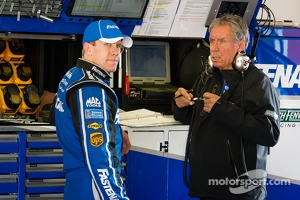 DO YOU FIND YOURSELF BEING ANTSY IN PRACTICE AFTER THE FOUR WRECKS? “Well, tomorrow we are going to draft so I looked at Jimmy (Fennig) and he said, ‘Hey, we are here to race and forget about what happened, it doesn’t mean anything and we have to prepare the best we can.’ So we are going to go out there and run with the pack and see what we’ve got and just race.”

WHEN YOU HAVE THE BAD LUCK LIKE THAT DO YOU GO OUT THERE AND NOT WANT ANYBODY TO GET AROUND YOU? “Kind of. Jimmy was kind of a little reality check there because if he had been down and out and nervous it would have really fueled mine but he said to forget it and do it like we just showed up. We were going to go out there and act like it didn’t happen. He is serious and that is cool.”

DID YOU HAVE A LOT OF ELBOW ROOM OUT THERE? “We were good. We were just running single car runs.”

JIMMY HAS BEEN THROUGH THIS BEFORE WITH MATT (KENSETH). “Yeah, someone texted me that Bobby Allison wrecked three cars and then won. I haven’t wrecked a rental car yet so we should be good.”

HOW ARE YOU HANDLING ALL THIS ADVERSITY YOU HAVE FACED OVER THE LAST MONTH? “It is fine. We are here to race. You have to expect it going in and the guys at the shop did an awesome job getting these cars ready and getting enough cars ready for us to come to Daytona. It is normal, nothing big. You just move on.”

YOUR PLAN TODAY WAS SINGLE CAR RUNS? “Well, I was looking for some single car runs and looking for some more speed. I didn’t really need to get in a group today. Tomorrow we will work on the group stuff and see what we find out tonight and then tomorrow go get in the pack of cars and go draft.”

THIS IS SOMETHING WE HAVE SEEN BEFORE, GUYS REBOUNDING FROM ISSUES TO WIN THE 500. THESE THINGS HAPPEN RIGHT? “It happens. You just have to be prepared for it and you can’t worry about it. You can’t bring those laps back.”

IS THERE ANOTHER CAR COMING FROM CHARLOTTE? “We already got it at 6 o’clock this morning and they already put it in the truck. While you guys were sleeping, we were working.”

Danica Patrick and Tony Gibson talk about their Daytona 500 strategy

Expect the unexpected at Daytona 500